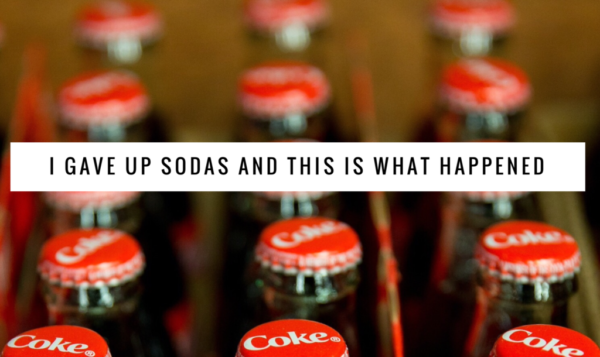 For me a new year brings the urge to get healthy and fit not only for myself but for my family. With it came bootcamp three days a week, extra workouts in the evenings, and the desire to give our nutrition a serious edit. You see, this health and fitness driven desire I get usually gets into full swing right around Lent, and this year all liquid calories made the cut. So there I was, with the grand idea to consume water and nothing else —  and a long 40 days and 40 nights ahead of me.

A little back story on how much of a soda addict I am not: growing up, we never had sodas in the house. Sweet tea and Kool-Aid, that was pretty much it. Even with that, we never drank water. As an adult I slowly slipped into drinking my fair share of sodas. I wasn’t one of those that HAD to have one at a certain time of the day or had any excuse to drink them other than a tasty drink to go with my meal. As a mom, I started to notice myself allowing the boys a cup of watered down soda with their meals more often than I’d like to admit.

Why? Why give it up so drastically? Everything except water?! Trust me when I say I thought I was biting off more than I could chew when I made the decision. A few weeks into my super charged sleep deprived workouts it all hit me. I’m working my butt off just to have a big ol’ glass of liquid calories (a lot of them at that) ruin it all. It sounded like such a waste to me. Making a sacrifice for Lent is something I value, and this seemed like I’d have to put in some serious effort to last the entire Lenten season. Win win, right?

Week one. It was hard. Not like headaches and cranky kinda hard but just having to alter my lifestyle was difficult. I realized after day one that temptation would stop me dead in my tracks if I had a house full of sweet tea and 2-liters. So, I trashed it all! Because what self-respecting mamma wouldn’t want the whole fam to reap the benefits of her crazy lifestyle change?! A family that healths together … ummm is healthier together? Maybe? Probably.

Now that my house was free and clear of any liquid calories I was set. At least I thought. Water was cutting it most of the time, but there were times where I craved that carbonation and some type of flavor. I turned to LaCroix for that fix. I’ve had LaCroix in the past and in complete honesty, it hated it. So. gross. It was just not my jam but I knew it was the only thing I’d allow myself to consume guilt free. It was free of everything, zeros all the way down the nutrition facts. So I carried myself over to Target all optimistic and doe-eyed about the fun flavors friends suggested I try. Got home with about $30 worth of fancy, bubbly goodness that I knew was going to put some pizazz in my life … you know, make me feel fancy. Took my first sip. Yep, still gross. But I learned to love those bubbly little suckers. LaCroix turned out to be my little glimmer of hope when I thought I was going to fall off the bandwagon. It’s an acquired taste but hey, I only had a few more weeks of this.

Over the next few weeks, it got easier. In fact, it got to be my norm. Not only had I NOT thought of a sweet tea or soda in weeks but my kids … oh my goodness did I see a change in my kids! Before this all started, they wanted only sodas or sweet tea. Even with it being watered down, they wanted it and would do anything to get it. It had gotten to a point that we were hiding sodas from them so they wouldn’t find a way to get it. Weeks into it all, they had no other option but water and they were thirsty so water is what they chose. I noticed massive changes in their behavior. Kade went from having accidents almost everyday to one or two in a month’s time. Their bedtime routine was a breeze. Kellan’s extreme ups and downs had pretty much disappeared. Their appetite was better. Their naps were better. All around, water proved to be so beneficial to them, and sugary juices and drinks proved, well, otherwise.

As Easter came and went so did that thought of resorting back to my normal habits. At the end of Lent, I decided NOT to get back into old habits. The fact is, they were not my norm anymore. My norm was lots and lots of H2O and I felt way too good inside and out to throw it all away on an 8-ounce can of crap.

It’s been about four months since we gave sodas the boot. I have not once looked back. I can take a sip of a soda or juice and be taken back in how sweet it is to me now. So sweet that I can’t make myself take a second sip.

What did I learn? I learned a good bit actually. I learned that now, one sip of soda or sugary drinks sends my body into panic mode. Not only do my taste buds pick up on all that sugar, but I get headaches and my stomach stays upset for a good bit – with only one sip! I learned the huge impact they had on my kid’s behavior. I learned that all together my gut felt healthier; it felt so clean. I also managed to learn some pretty important facts about the effects of both water and sodas on the human body:

– EXCESS SUGAR. A 20 ounce bottle of soda contains the equivalent of approximately 16 teaspoons of sugar.
– EXCESS CALORIES. A 20 ounce bottle of one of the most popular sodas packs a punch of 280 calories. That’s the equivalent of an entire meal if planned correctly. I’ll pass on the soda and snack down on 28 baby carrots and 3 tbsp of hummus with about an extra 100 calories to spare!
– LINK TO DIABETES. Over the past 30 years, adult diabetes rates have nearly tripled.
In the same period, soda consumption has doubled. We absorb liquid sugar in as little as 30 minutes leading to a spike in blood sugar that the body is not well equipped to handle, particularly in repetition. These spikes in blood sugar can overwhelm the body and lead to the transformation of sugar into fat in the liver, which contributes directly to the development of diabetes.
– LINK TO OBESITY. Adults who drink one soda or more daily are 27% more likely to be over weight or obese.

And now for the effects of drinking water on the human body:

– INCREASES ENERGY. Since your body is mostly water, drinking it helps you think, focus and concentrate better and be more alert. As an added bonus, your energy levels are also boosted!
– PROMOTES WEIGHT LOSS. Removes by-products of fat, reduces eating intake (by filling up your tummy if consumed prior to meals), reduces hunger, raises your metabolism and has zero calories!
– FLUSHES OUT TOXINS. Gets rid of waste through sweat and urination which reduces the risk of kidney stones and urinary tract infections.
– IMPROVES COMPLEXION. Moisturizes your skin, keeps it fresh, soft, glowing, and smooth. Gets rid of wrinkles. The best anti-aging treatment around.
– MAINTAINS REGULARITY. Aids in digestion as water is essential to digest your food and prevents constipation.
– PREVENTS CRAMPS AND SPRAINS. Proper hydration helps keep joints lubricated and muscles more elastic so joint pain is less likely.
– MONEY SAVER. Water is FREE! Even if you choose bottled/filtered water, it’s STILL cheaper than that high sugar and fat-filled latte!

And most importantly, I learned that water works for our family, it works for my kids. If one of us is making better choices, everyone else feeds off of it.

I know it seems like a huge change to cut drinks down to just water but trust me when I say you can do this. It’ll be hard and your kids will likely wonder why mom went bonkers but it’s so so SO worth it. Go ahead, chunk ‘em. Throw them all out and get yourself and your fam on their way to healthier bodies, you will have no regrets. Promise.