I stroll with my two young sons almost everyday through our neighborhood. Since February, the cloudless sky can almost be too blue and too beautiful with the bright sun beaming down on us. I have to pull the round shades over them while they munch on Cheetos and guzzle Capri Suns. The tips of their legs are more tan than their thighs.

The strolls are more for me than for them. It gives me a chance to have real peace. The two of them seem to give in to the gentle rumble of the double stroller and are still. Elsa belts ballads from my iPhone as I finally get a chance to answer emails or scroll through my Pinterest feed. At best, I make it through the stroll without hitting an odd piece of crumbled pavement, making my sons jump. At worst, I flinch when an SUV speeds by uncomfortably close to us. I think about posting about it on Nextdoor.

What I don’t worry about is letting them go out to walk the dog or for any form of exercise only to be gunned down out of suspicion. The thought can’t seem to fully form in my brain. And that is my privilege as a white woman. No one should live with that kind of fear. No one. But Ahmaud did, and so did his mother. What a nightmare Wanda Cooper-Jones and the rest of his family must be living in right now; a nightmare so many mothers fear.

I’ll admit that I was unaware of who Ahmaud Arbery was until just days ago. But once I did, like a magnet, I was drawn to every piece of press that manifested in my social media algorithms. I read every article. I thumbed through a variety of hashtags. And though the horror of the situation unraveled before my eyes, I noticed an odd, repetitive phrase woven into the comments of sadness and confusion. The end was not necessarily the same, but the beginning was — “Well why didn’t he just …”

I couldn’t figure out what was so strange to me about this phrase. It seemed relatively innocuous at first. But the phrase burrowed into me like a tick below my skin. I haven’t been able to shake its echo in my brain. Finally, it’s bubbling back up through my fingers in this blog post. I say it again to myself — “Why didn’t he just …” Is this the phrase that kept this man’s assailants from being arrested? Is this the mentality that has tipped the scales of justice so unfairly? Not just this time but all the times before?

A flash of the grainy PBS documentary I show my 11th grade history class suddenly flashed in my mind’s eye. It’s called “Eyes on the Prize” and features a lot of key figures of the Civil Rights Movement in interviews. One of my favorite clips to show my class is the Rosa Parks interview. They’re usually shocked to learn that Rosa Parks had a history of battling racial injustice in her early days, particularly advocating for sexually assaulted black women whose rapists faced no repercussions. When asked about the day the bus driver ordered her to move to the back of the bus, she recalled the reason for her “no” was because, “I didn’t think I should have to.”

“I didn’t think I should have to.” I always pound my fist on my desk in jubilation when an aged Ms. Parks murmurs that recollection without flinching. Suddenly the modern version of that bus driver’s question was pasted across the internet. “Why didn’t he just wait for the cops to come?” I read. Now I know the answer: He didn’t think he should have to.

“Why didn’t he/she just …” I suddenly realized that I heard that phrase all of the time — on news sites, in blog comments, among the conversations I have with my peers. The subject is not always the same. Sometimes the subject is a woman and the clothes that she’s wearing or how much alcohol she consumed. Sometimes it’s after a tragic accident involving a young child. I think I used to think this phrase was well meaning, but I don’t anymore. What I see it now is the death of empathy.

Has our first inclination in hearing about tragedies always been to blame the victim? Or is that a new trend with the advent of social media? I’m not sure I know the answer to that. I’m sure if I was a woman of color or a member of another marginalized group, I’d know the answer. I can admit that I’ve been asleep for a long time. I’m awake now.

Naturally, there are hundreds of phrases I hope my sons never utter. That’s not what this post is about. This post is about that snide, deceitful one. This post is about the one that is most likely to attach blinders to their temples. I’m not worried about them growing up to harbor racist ideologies in their hearts. I will combat those with every fiber of my being. What I worry about today is the detached, apathetic reactions to racial violence that kept a thing like the killing of Ahmaud Arbery from coming to light after being passed through the hands of several DAs in Georgia.

Are there much bigger matters for me to grasp and speak out against? Yes, but I’m still figuring out how to do that without being belittling, undermining, or insincere. I want to learn how to advocate with my privilege in tow. I also want to be aware of the creepily innocuous that allows this headline to splash across newspapers time and time again. Would this phrase have stopped what happened? No. But it could aid the response.

To all the mothers out there who live with this wicked little phrase fluttering outside of your ears — I won’t stand for it. I shouldn’t have stood for it for so long. And I’ll continue to learn what other things I hear and say that go against my Christian, American, and motherly desire for peace and justice for all.

All I can say to those who have felt victimized for any reason: I’m listening. 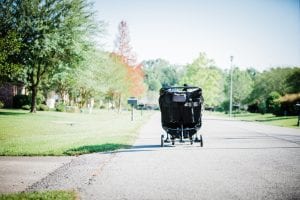