Note: This post is part our series in observance of World Breastfeeding Week and is sponsored by Woman’s Hospital.

Breastfed or Bottle-fed? One Day it Won’t Matter

As I write this, I’m wrapping up a beach vacation with my seven and four year-old. On this vacation, I didn’t get a vacation from being a mom – I worried about drowning (mostly), the sleep schedule we threw out the window, diet, sunburn … and I never gave a thought about breastfeeding. Not one. I don’t think about it all that much anymore unless I’m prompted to share my story if I think it can help another mom in that season of her motherhood.

World Breastfeeding Week is a bittersweet one for me. I’ve been a breastfeeding mom AND I’ve been a bottle-feeding mom. Back when I was in the throes of trying to figure out how to feed my first child, it seemed like a matter of  life and death. I mean, it IS a matter of life and death. If you don’t feed the child, they die, right? This is all-consuming, serious business. I was one of those mothers that desperately wanted to breastfeed my first born. Breastfeeding her was going to be The Thing that saved me from complete and utter failure as a mother. We all have our own definitions of what it means to be a “good mom” and that conversation deserves its own post, surely because in one way or another we’re all wrong. Well, I was wrong about breastfeeding. Because it didn’t work for me with my daughter. There’s a long story there involving pain and crying and guilt, one that’s most likely the same for many of you.
I formula-fed my daughter.

I felt left out of the mother sisterhood that could whip out a boob and calm a baby. World Breastfeeding Week seemed like a celebration of the capable. To me, it was kudos on top of kudos for those that already got what they wanted. Was I bitter? OH, YES. But I didn’t realize what is most important – what would have saved me heartache – that we’re all in this together.

Three years after my daughter was born, we had my son. His birth was a joy and a light in our lives, yada yada yada but it was also a chance for me to REDEEM MYSELF as a capable mother! I was going to BREASTFEED HIM! And I did. I AM a good mother. I did it! Victory for me!!! This was a story of completely selfish personal accomplishment and growth – except that it wasn’t, really. For me, breastfeeding was all-consuming. I did it at the expense of myself, my other child and to an extent, my marriage. It was a story involving pain and crying and guilt, one that’s most likely the same for many of you.
I breastfed my son.

The irony? I still felt left out of the mother sisterhood that “had it easy.” I envied when I should have been more outwardly supportive. But at the same time, I felt guilty for being able to breastfeed when others couldn’t. I was a mother twice over and hadn’t learned the most valuable lesson – we’re all in this together.

I remember before both children were eating solid foods, how I longed for the time when people would stop asking me as a matter of casual conversation, “So, are you breastfeeding?” I mean, HOW PERSONAL IS THAT?!? It took everything I have as the person that my parents raised not to respond with, “So, what kind of birth control are you using?” because those questions are equally personal in my opinion. If only I had known then what I know now: it doesn’t matter. My children are healthy and smart. I’m a good mom. I make good decisions and bad ones every single day.

World Breastfeeding Week 2017 is about working together for the common good. This is an idea I can wholeheartedly get behind and ask you to do the same. Of course, the encouragement to breastfeed as the eco-friendly, family friendly, wallet-friendly option is the ultimate goal, my take-away from the focus is the “working together” part. Every kind of mother is a part of this tribe I’m addressing. If you’ve ever fought a battle over sunscreen application, I’m talking to you: We’re in this together. If you’re in that boob or bottle season of motherhood and you’re stressing, I’ve got you. I’m here to tell you that there’s someone that’s felt and will feel as you have. Feed that baby any way you can, Mama. They’ll grow. It’s a short season you’re in, I promise. It doesn’t matter how you get to the next one – we’re all in this together. 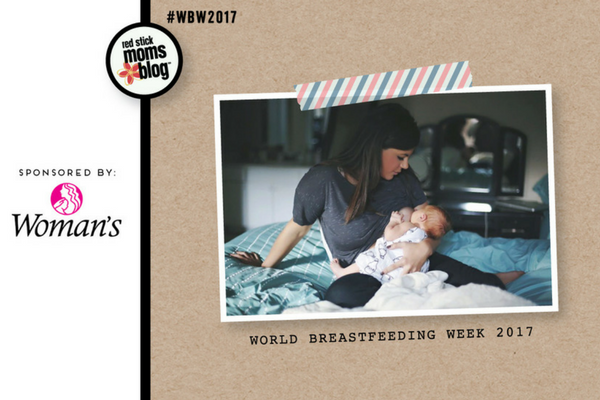