It’s no secret to anyone that knows me, I love a good deal! Spend the night at a new Chick fil a for a year of free chicken? Done! Stand in line at a new Zaxby’s for a year of freebies? Done! Scan the barcode for a $10 off coupon? Done! So seven years ago, my husband and I had been married for four years. We were working our tails off to be rid of debt. One day my sister-in-law came to work talking about making her own laundry detergent and how awesome it was and how little it cost her. Immediately I was intrigued, but I felt intimidated to try on my own. A few months passed, I would randomly ask her about the process, but I still never attempted it. But y’all this was detergent that cost around $30 and lasted MONTHS if not the year!

One day she suggested we get together to make some together. I jumped at the chance, she sent me the ingredient list and I got to shopping. We met up and got to work! Now, mind you, by this point in life I had pinned no less than 15 different recipes for varying laundry detergent and I was ready. Now when we made my first batch of laundry detergent we were making a liquid soap. I was embarrassed I had waited so long to try it! It was so easy! But here’s the thing, it made A LOT! And while it saved me money, it did NOT save me space. I also had issues with consistency; one batch would be super liquid-y, the next would be almost gelatinous. And storage continued to be an issue in our tiny house.

Fast forward, and I began to play around with all those detergent recipes I’d pinned so long ago. And I found, I actually preferred powdered detergent. I discovered I liked Zotes to Felsnaptha – even though they really aren’t that different. It’s like preferring brown M&Ms to the blue ones, if I’m being honest. I progressed from grating Zotes to tossing chunks of it into the food processor. I learned I could microwave the bars of Zotes and 1) it made my house smell amazing, 2) the kids got a kick out of watching it puff up like a cloud, and 3) once it was thoroughly cooled, it crumbled at the touch making detergent production so much easier. Then, I discovered Zotes flakes! For a few extra dollars, I could get Zotes already crumbled!! 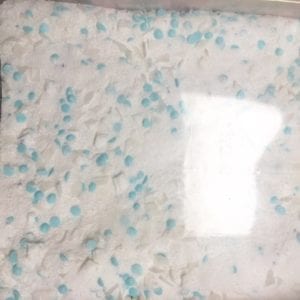 So here’s the breakdown. I spend around $30 every 9-12 months making laundry detergent! That’s it y’all. We save money on detergent and I get to be a little domestic. It only takes 2-3 tablespoons of detergent per load. Wanna know another little secret? I get all my ingredients through grocery pick up, so that saves even more time! Are you interested yet? Here’s the recipe I use. I just dump it all together and mix it up. It does still take up a bit of space, but I have a trusty plastic bucket of what used to be animal crackers from Sam’s that we keep on the top shelf of the laundry room and a smaller container we keep more accessible and refill throughout the year.

Zote Laundry Flakes ( 17.6 oz box or 2 bars if you want to grate it yourself) 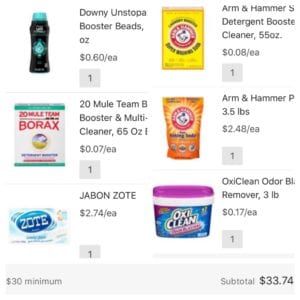 *This ingredient is merely for that “laundry smell” and can be left out altogether, if desired. Some people use Purex crystals, they just don’t have a scent I love.

Use 2-3 tablespoons per load & enjoy!

I happen to have a GIANT bowl I can mix all of this in. But in the beginning, I just did it in batches and poured it into my animal cracker bucket! Who is up to try their hand at detergent? We’ve been making this detergent for around 6 years now and our family loves it. Hope y’all enjoy it too!