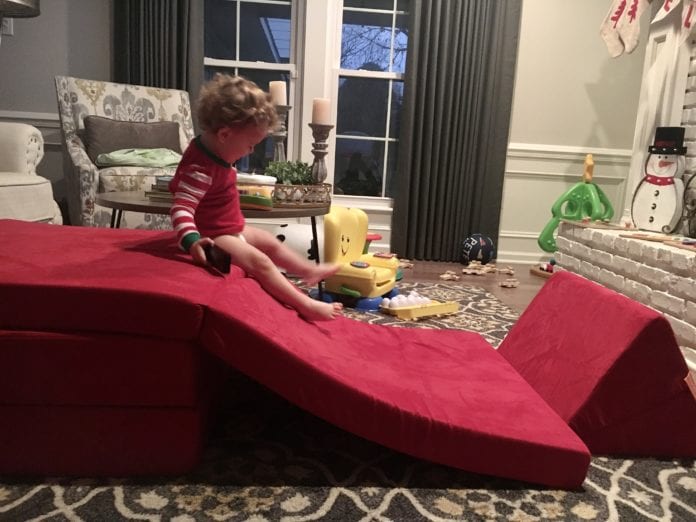 We got our nugget from my parents for Christmas 2019. I had seen one friend mention getting it for her son on Facebook, and I told my mom I thought it would be a fun gift for my boys for Christmas. This was before I really saw all the hype surrounding them and the demand for them skyrocketed. Now there are waitlists, lotteries and backorders…or people selling them in Facebook groups for double the price. When you go to Google and type “nugget,” the first thing that pops up is their website. In case you don’t know what a nugget is, let me explain. According to their own website, the nugget is “the infinitely configurable play couch made up of four foam pieces: base, cushion, and two triangle pillows.” It comes in several different colors, and new colors are released every so often while old ones are retired. Some might consider it a bit pricey for a toy couch ($229), but in my opinion, it was completely worth it. It allows kids (and parents) to really use their imaginations to come up with different configurations and uses for it. The possibilities truly are endless. It can be a cave, a fort, a jungle gym, a slide, a car ramp, a half pipe or simply a place to chill out and watch a movie. Bigger kids could use it to sit and play video games or study. It was named one of CNBC’s hottest gifts for kids in 2019. It has really come in handy with this nasty winter weather lately and being stuck inside. And it’s not only my kids that love it. My dad has slept on it more than once, and I’ve recently been using one of the triangle pillows to prop myself up to sleep as I near the end of my twin pregnancy. Perhaps my favorite feature is that the cover is removable and can be washed in the washing machine. We’ve washed ours several times without issue. I was doing research for this article and learned that there’s even a 30-day trial. If you don’t think it’s the best, you can return it for free. Another positive in my opinion, is that it’s manufactured right here in the US of A…North Carolina specifically. So go ahead and get a nugget for your nuggets! Anyone else have one…or more? Let me know what you think! I’m already contemplating which color I’ll get next. 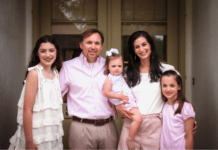