So I am fully aware that Halloween is October 31st, but I think about Halloween costumes pretty much year round. I love planning what we’ll dress up as especially since having kids. I’ve come to love homemade costumes too. Store-bought costumes are great, but you have so many options when it comes to homemade. I get most of the pieces from Amazon or from things we already have around the house. You can spend a little or a lot and come up with something truly amazing. 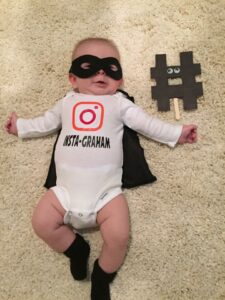 Since my oldest was born, we’ve managed to make all but one of his Halloween costumes plays on his name, Graham. For his first Halloween, he was a superhero named “Insta-Graham.” He and his trusty sidekick Hashtag were fighting crime one cute pic at a time! It was THE BEST! The next year he was “Grambo” (a.k.a. Rambo) and the next a “Graham-Paw.” When we had our second child, Emile, I thought our days of Halloween costumes incorporating a name were over, but my husband thought of “Happ-Emile.” We spray painted a diaper box red and put some yellow arches on it, and he was a Happy Meal. My husband and I were McDonald’s workers and that’s where the “Gram-burglar” ( the Hamburglar) came in. 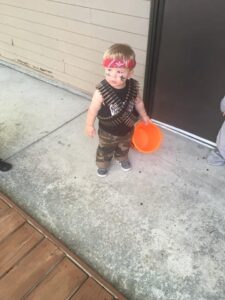 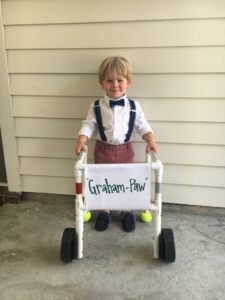 When I found out I was having twins, one of my first thoughts (after the initial thoughts of “holy sh*t!” and “How will we do this?!” of course) was how fun it would be to dress them up for Halloween?! I’m currently torn between costumes that incorporate their names (Felix and Henry) or trying to dress all six of us in a common theme. If we do decide to all dress together, I don’t want to spoil it, but it’s going to be one of my favorite cartoons from the 90s that’s recently been revamped and is back on television. 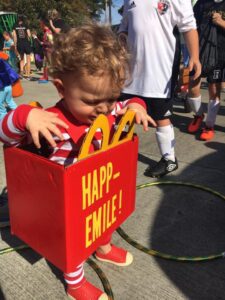 Pinterest has only fanned the flames of my Halloween costume idea fire. It’s almost become a challenge for me. I definitely foresee Toy Story costumes in our future; I’m just waiting until the twins are walking to turn them into the head and tail of Slinky Dog. I know it will get harder and harder each year to convince my kids that my costume idea is cooler than a Power Ranger or an Avenger, but I hope to pass on my love for creative costumes and maybe they’ll even come up with a few of their own. Do you have any ideas?! Let me know! 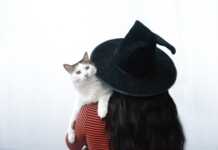 Halloween Costumes You Probably Have in Your Closet 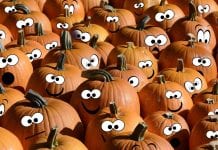 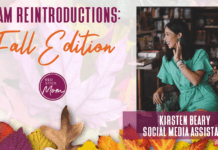