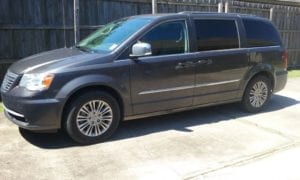 I LOVE my minivan! It may not make me look like the hippest mom in town, but when I’m behind its wheel I’m definitely one of the happiest. To me, my minivan represents so much more than just a vehicle. It symbolizes our season of life and our focus on family. I’m a mommy chauffeur and proud of it!

I actually didn’t set out to be a minivan mom. When my first son was a few months old and we needed a new family car, we bought a Subaru Forester wagon. It seats 5 comfortably, which was perfect because that was the size of our family at the time (I have two older stepsons). But then I had my second son, and suddenly anytime the whole family was together we needed to take two cars to go anywhere. And splitting up the family into two vehicles always caused an argument of who was getting into what car. “We need a car that’ll fit our whole family,” I told my husband. So we bought a used GMC Acadia SUV which had three rows of seating. And I loved the extra space it gave me and the fact that our whole family could finally travel together in one vehicle again.

Despite the gas mileage, I was happy being an SUV mom. I had the extra space I wanted, the car payments were reasonable, and life was good. But then we took a weeklong trip to California during which we rented a minivan. And my life was transformed! The minivan, a Dodge Caravan, had so much more space than my SUV. And its interior was so much more smartly designed. Cupholders were more accessible. Storage was plentiful. The entire car was created with a family in mind. I didn’t think that there could be such a huge difference between an SUV and a minivan, but let me tell you, the difference was immense! After a week of driving the Caravan around the busy streets of LA, one thing was clear. We had to get a minivan for ourselves!

Lucky for me, my husband agreed! So when we returned from our trip, we began the search for our own minivan. We settled on a Chrysler Town & Country, and let me tell you – I LOVE this minivan! It’s so much better than my SUV ever was. My minivan has cupholders everywhere, which is great because I’m always grabbing someone’s drink as we drive around town. It has so much storage too! There’s storage on the driver’s and front passenger’s side doors, in the center console and there’s two storage compartments in the dashboard as well. There’s also cargo nets behind the driver’s seat and front passenger’s seat, and even storage running across the top center of the vehicle! And both the second and third rows of seating fold down all the way into the ground, so if we need to haul furniture or something else big and bulky, we can just remove the carseats, fold the seats down and load up!

I also love the technology that’s in my minivan. It’s completely designed with a busy and (let’s face it) sometimes distracted mom in mind. My minivan has a DVD system in which the kids can wear headphones to listen to their DVD, and I can change the radio station to listen to whatever I want. It also has a backup camera (because, let’s be real, this Mama can’t back up something as big as a minivan using a rearview mirror alone) and blind spot detection indicators in the sideview mirrors. And the Bluetooth! Oh how I love making handsfree calls in my minivan!

I know that many of the features that I love about my minivan can also be found in some SUV models. But being a minivan mom isn’t just about the car that you drive and the features it has — it’s a lifestyle. Driving a minivan instantly tells other drivers around you that you’re a parent. It automatically communicates that you’ve got precious cargo inside. And it also says that you don’t care if you give up a few coolness points to get your family safely from point A to point B.

I know a lot of moms say they will never, ever drive a minivan, but let me tell you, they’re great! There are countless SUV to minivan converts out there who agree with me. So if you’re in the market for a new vehicle, consider joining the minivan club. Trust me, you don’t have to start wearing mom jeans just because you own a minivan!