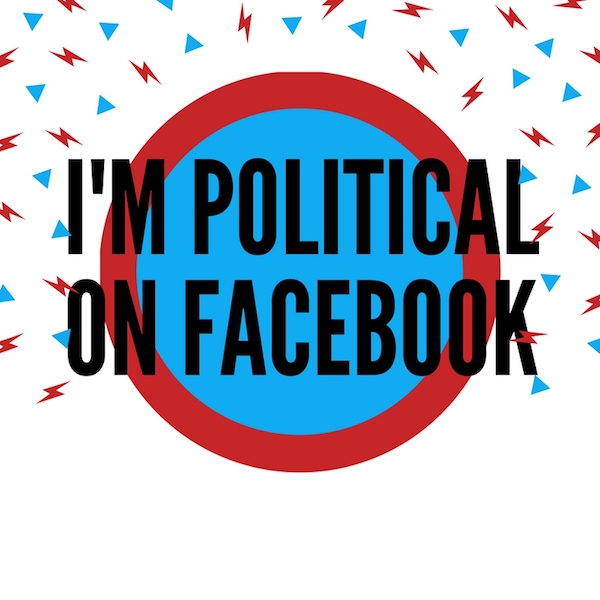 Yep. I’m that Facebook friend. The one who leaves nothing to the digital imagination when it comes to her political beliefs. You probably either love me or hate me. Maybe you’ve even blocked me or unfriended me. That’s a chance I’m willing to take.

Growing up, I was the kid who watched Dateline instead of cartoons. Who stayed inside from recess in 5th grade to watch the OJ verdict. Who ‘felt’ issues with a intensity beyond her years. And while my involvement in politics has occasionally taken a backseat to other parts of life, it has come back with a vengeance since my daughter was born.

Becoming a mother instantly raised the stakes for me. My perspective on the issues evolved and gained depth. Some of my priorities changed. Some became more important than ever. More than anything, I gained confidence in my beliefs. The kind of confidence that makes you want to post and share things on Facebook without apology. That said, I do not post indiscriminately. I have adopted some loose ground rules for political Facebook posting and commenting that I hope you can appreciate. I do my best to follow them. But, I’m still human.

This is by far the most important rule. A little snark is inevitable sometimes, but hatefulness is never acceptable. Do your best to fight the urge to be impulsive when you post and respond. Think it through. Imagine your boss reading it. Imagine your daughter reading it. Consider what value it brings the conversation. Never resort to name calling. Know how to recognize when a conversation is spinning out of control so that you can respectfully back away. Follow the mantra, “When they go low. We go high.”

2. Be mindful of frequency.

I try to keep a VERY casual post quota. A post per day about family. One about an awesome article I read or Ted Talk I watched. One about politics. Exceptions for debate days, major public announcements, or days when I’m feeling particularly fiery (though I try to keep these to a minimum).

3. Don’t post anything you aren’t willing and able to defend.

More often than not, someone is going to post a counterpoint. If you go to the trouble of making it public, you better believe it to be true. And you must be able to calmly and coherently defend it (refer to rule #1).

Nothing on the internet is truly private, but I would advise you to keep an eye on exactly who has immediate access to your thoughts. Depending on your line of work, there is always the potential for your employer to take offense to your posts. And believe me, people will look it up. This is another reason that rule #1 is crucial. But still, check the privacy settings on each individual post before making it official. I also like to occasionally log out of my account and view my timeline as someone who isn’t my Facebook friend would see it. Sound a bit paranoid? Sure. But we’ve all heard the stories of people losing their jobs over their social media mistakes.

Do I think my posts will change your vote? Most likely not. But I hope it will make you think about something in a way you hadn’t before. As much as it can be a black hole, Facebook is also a valuable tool that connects us to people we never would have met and ideas we never would have considered. I’m amazed by the brilliant thoughts and perspectives of many of my Facebook friends. Even those with whom I disagree. I’m not ashamed to admit that Facebook posts have caused some of my beliefs to evolve.

For many of you, November 9th can’t come soon enough. I understand your frustration. But you might be wise to go ahead and block me. Because yes, I’m political on Facebook. And no, it won’t be changing any time soon.

How are you feeling about this election season?