I cried after I dropped my son off at daycare this morning. It isn’t his first day. It’s his fifth day. He cried, so I cried. Mom guilt hit me full force. I sat in the parking lot for a while after bringing him inside, reminding myself how important this new journey is for both of us. I’m finally able to work consistently and help my husband with the financial responsibilities of our family. As for Junior, he is getting much needed therapies and social interaction with his peers.

This is good, but it doesn’t make it easy.

I know it is, but it doesn’t change the fact that my chest is still tight hours later, and I can’t get enough air into my lungs.

When I first became a mom nine years ago, things were different. I was in the Air Force, so I went back to work exactly six weeks after giving birth. I didn’t shed a single tear when Liliana started daycare, and neither did she. I’m convinced she was too young to notice or care that I was dropping her off with total strangers. 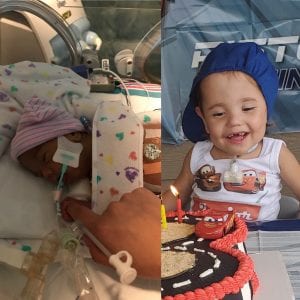 Junior was born at 24 weeks and came home with a trach, dependent on oxygen and a ventilator. I’ve been by his side basically 24/7 for the past three years, including his 297 days in the NICU. This is harder than it was with Liliana. And scarier.

My biggest fear is that he won’t be understood, or his needs won’t be met, mostly because he’s nonverbal. Compare him to a 9-month-old baby: Even though a child that age can’t verbally express their wants and needs, most of them have their own ways of communicating. I hate to use the old cliché about moms knowing their kids better than anyone, but it’s mostly true in our situation. I know what all of his gestures and signs mean. I know his routines, what he hates, what he loves, when he’s hungry or thirsty. What if his caregivers don’t?

Honestly, my reaction took me by surprise. I have friends and family who cry over every milestone their kid(s) meet. Every “first day” is a huge deal. I have nothing against that, but it just isn’t my style. I’m more of the emotionally detached kind… I am extremely emotional, but I’ve learned to “turn it off” over time to cope with life. Today, that defense mechanism didn’t work for me. I’m at a loss, and I’m dreading drop-off tomorrow.