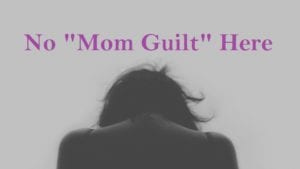 Confession: I don’t really get “Mom Guilt.” I mean I neither understand nor do I experience it. To be honest, I didn’t really know it was a thing at all.

Maybe that’s because I had a couple of kids earlier than many of my friends did. Maybe it was because I was on kid 3 before I joined a Mom group on Facebook. Perhaps it was because I watched a well-rounded, working, fulfilled woman model motherhood throughout my life. It could be because I don’t have a Mom Squad (I have a few, close, equally guilt-less moms who are my people). No matter the cause, I didn’t hear a lot about it. I was late to the Mom Guilt party, and I’ve never bought into the concept.

In fact, the only semblance of Mom Guilt I experience is when I feel like I should feel guilt but just … don’t. Like when I go out to dinner with my friends. Or when I take a work trip out of state, leaving the kids with–GASP!–their other parent. Or even if I want to go for a walk around the block to escape some lightsaber battles staged in my living room. Sure, I’m concerned about their well-being. Of course I’m curious about what I’m missing while I’m gone. But “guilty”? Nah. If I felt guilty for everything that I’m evidently supposed to feel guilty about, I’m sure I’d start to resent my role as a mother. And I don’t resent it–I love it!

I remember one of the first times I heard the phrase. Some commercial that I’m sure was attempting to be supportive of women but was nonetheless condescending was encouraging Mom not to feel guilty for spending money on herself or taking that trip without the kids. I remember having a little panic attack, realizing I was late for yet another fad (I’m always late to these parties. I still don’t know what LuLaRoe is, exactly). If they were telling me not to feel guilty, I felt like I was neglecting to feel something I was evidently supposed to feel: “Oh, damn! I was supposed to feel guilty for that?! Oh, well…”

Consider it my oblivious nature, but I just didn’t know! I honestly think it’s yet another social construct. I mean, is there such a thing as Dad Guilt? Does that phrase even exist? Are there any commercials reassuring Dad not to feel guilty for that guys’ night? I’m also not a very emotional person. I tend to make decisions based almost entirely on logic, almost to a fault (I can toss baby clothes like it ain’t no thang).

But I honestly think my lack of Mom Guilt (ugh, eye roll) makes me a better parent. My kids see a confident, gratified parent who knows when she needs to prioritize herself or other obligations–you know, just like Dad! And it’s not like I’m leaving them to their own devices: they’re with another, equally-capable and loving parent! I’m sure it would be different if that weren’t the case. I love my spouse and children more than anything, but I also remember the airplane crash idea: “In the case of an emergency, please put on your own oxygen mask before assisting others.”

For taking care of myself so that I can take care of others, no I don’t feel guilty. Far from it.