It’s that time of year! Time to stock up on candy corn, cream of mushroom soup, and gift wrap! That’s right – “It’s the holiday season” (“so a-hoop dee doo and dickory dock!”) And in my house — like yours, I’m sure — that means many things, from the days getting shorter to the dollars stretching longer. But one thing this season always guarantees is the Peanuts Holiday Collection. For us, it’s time to dust off the DVD set of Charlie Brown and Friends for at least five months’ worth of nostalgic cartoon-watching, stretching all the way from October to February.

It begins early enough — I would say that we wait until that first cool snap, but in Louisiana, we’d be waiting until January. Instead, starting October 1st, it’s officially Halloween Season in our house, which means out comes the deluxe DVD pack! Just seeing the trinity of videos is enough to make me bleary-eyed. There they all are, awaiting their time of year: The Great Pumpkin, Thanksgiving, and (of course) Christmas. 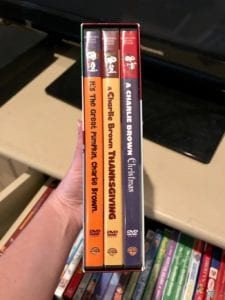 Even though the precious box set doesn’t include it as canon, we continue through Valentine’s Day. I admit that this is mainly because it’s sentimentally too much for me to put the gang away in January. They somehow serve as a symbol of such a warm, cozy time of year. I know I’ll only have so many of these precious seasons with my kids and that each season goes by too quickly. Putting the set away in the collection of other DVDs means I’ll have to wait another seven months before such a special time of year. SEVEN MONTHS!

I’m afraid I’ve passed on my obsession to my impressionable kids. They all know the exact musicality of each episode and recite their favorite lines: “I got a rock.” For me, watching them watch the episodes is even more entertaining and heart-warming than the shows! They oddly love the Mayflower history lesson as a bonus feature on the Thanksgiving DVD and always giggle at Lucy having to go rescue her shivering brother after a long night of awaiting the Great Pumpkin in vain.

But there’s just something special about that opening sequence of the Christmas episode. When the crew is out ice skating to that somber but youthful “Christmastime is here … !” I just can’t contain the tears. They build and build through Charlie Brown’s ennui with the season and crescendo at Linus’s recitation of scripture on that quiet stage. Knowing what I’m in for, I start boo-hoo’ing as soon as he says, “Lights, please!” and I don’t let up until after Charlie Brown gets surprised with a tree makeover: “MERRY CHRISTMAS, CHARLIE BROWN! Hark, the herald angels sing … !” (Ugly crying at this point. Also kind of giggling at their giant animated mouths …)

I’m sure people have mixed feelings about the peanut gallery of Charlie Brown, Linus, Lucy, Snoopy, and the gang. After all, when I watch the shows, I often grimace at how loose they are with their language toward poor Charlie Brown: “Boy, are you stupid, Charlie Brown!” However, my kids and I are always reassured that they’ll find a way to come together in spite of their differences. Maybe the DVD set is just my version of Linus’s security blanket …

But as for me and my household, we’re watching Charlie Brown.