Every mom knows that sleep deprivation is just part of the job description. You sign up to be a mom, and have to fill out a checklist of things you know you’ll have to put up with those first few years: spit up, cleaning someone else’s behind, and managing to function on two hours of sleep and copious amounts of caffeine. Everything that comes after that stage is over is a surprise, but by that point, you’re expected to be able to roll with the punches.

The sleep deprivation part is, in my mind, the most difficult part of the whole gig those first few years of being a new parent. It’s only magnified if you’re sharing a bed with  someone who snores. Loudly. So I offer to you… 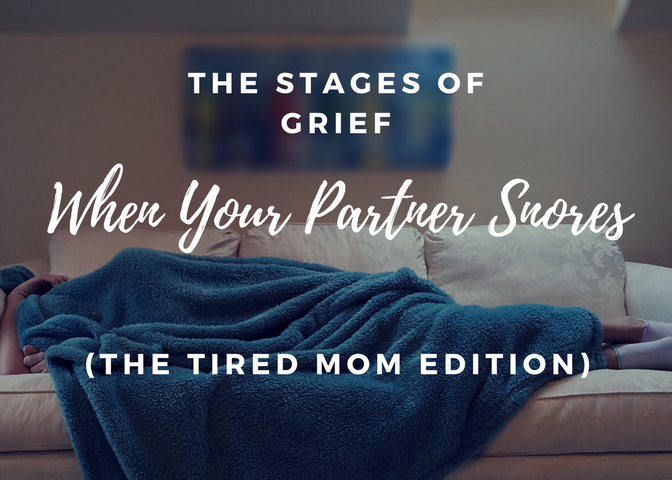 This is the  – good Lord, that CANNOT be normal – stage. The stage where you actually believe that maybe it is because of sickness and once the sinus infection clears up, everything will be back to normal and you will be able to get some sleep again. Then you can function like an actual adult. This phase does not last long; it quickly merges to…

The morning that I was induced with my first baby, I was a few days overdue, and my husband and I had spent the majority of the night arguing. I could barely sleep because I was 40+ weeks pregnant and miserable, but to add insult to injury, that joker had the NERVE to snore. Loudly. I’m pretty sure my hormonal self wanted to suffocate him with a pillow. Kidding. Kinda.

So he would start snoring, and I would get mad, and wake him up because he was keeping me awake. Then he would be mad because I woke him up because (in his words) at least one of us should get some sleep.  My doctor’s appointment was at 8:00 that morning and I ate a bowl of oatmeal, glowering at him the entire time for keeping me up. I don’t think we said two words to each other all the way to the doctor’s office!

This was pretty much the height of the anger stage for me.

The first few weeks at home with a newborn, the nights were a blur. My husband would get up and change the baby, and I would nurse her. I was so exhausted that I fell asleep easily.

That is, until the baby started sleeping longer spurts at night. Then, because I was getting a little bit more sleep, it was harder to ignore that freight train next to me. Finally, in what I am sure was a hormone-fueled rage, I banished the snoring machine to the couch for the next few months. I told him, “I am not sharing a bed with you until you see a doctor or have a sleep study! I cannot keep having you keep me awake!” I might have thrown a pillow or two…who knows. I take no responsibility for my actions in the sleep deprived hormonal state.

One more baby and several years later, and no one has gone to a single sleep study. However, we are sharing a bed again. Some nights, the snoring is more than I can bear. With the second baby, I actually brought earplugs to the hospital so I could get some rest over the sound of the snoring (not ideal for waking up when the baby cries, though).

I’ve tried noise machines. They help some. I’ve tried earplugs, but find them to be terribly uncomfortable. So I lay awake listening to him sleep soundly just about every night.

I have an idea of what this phase looks like, but to be honest, I have gone back and forth all over the entire range, with very little time spent in acceptance.

The closest I came to acceptance was a short period of time when we slept in separate bedrooms. It was the most glorious sleep I’ve ever gotten in my entire  life. I don’t think this is ideal; in fact, it’s far from great for intimacy, togetherness, and communication. So we share a bed and manage to get eight hours of sleep between the two of us. If that’s not acceptance, I don’t know what is.

Does your partner snore? How do you cope? Tell us in comments.