August 11, 2016, at one day old, my youngest son was diagnosed with Craniosynostosis.

The plates of his skull fused prematurely, causing him to be born without a soft spot. This meant that he would need major surgery to create a soft spot in his skull, followed by twelve to fifteen months of helmet therapy. Thankfully he didn’t have surgery until November (at three months old), so he only had to endure one summer as a helmet baby.

Most helmets are prescribed for twenty-three hours a day, seven days a week. 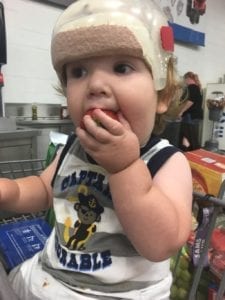 Admittedly, we probably totaled twenty-one to twenty-two hours a day during the summer. Even though it all worked out for us, I do recommend running any changes through your child’s doctor or orthotist first. We always had the helmet for naps and bedtime though, which is when the growth hormone is at its peak.

Stay strong, fellow moms of helmet babies! It goes by faster than you think!

The last two months of helmet therapy were the longest for us. Honestly, the whole ordeal was harder on my husband and I than our son. Little ones are so resilient and adaptable! It’s been eight months since we hung up the helmet, and sometimes we forget that it was even a part of our lives. For all of the hard days, we are still so thankful for the technology and medical science available today.

Another bonus, our baby boy loves to wear hats and looks so darn cute in them now, and we got to witness firsthand, how tough little ones are from the beginning.