Our home has currently been taken over by Maverick’s molars. Our once happy go-lucky babe is now in so much pain from his gums bleeding that all he wants to do is cry, be held, and watch either Mickey or Moana. Some seasons in toddlers’ lives are so much fun and amazing that you just don’t want them to end. This season? This is not one of those. It’s also one that I feel like drags on forever … anyone else feel that way? Between getting sick and teething, Mav has had probably 3 full days of happiness in the last  month. We’ve tried everything and anything that may help ease the pain and would comfort him, and luckily some have even helped. So I decided to put a little list together so when mom brain kicks in we can be one step ahead … amirite?!

We bought these and stuck them in the fridge overnight when he was younger. Now that Mav is a older we have these as well as this one. The vibrations really soothe his sore gums. We also have a Sofie, and that poor thing has been through the ringer, but it’s honestly worth every penny!

I’m not gonna lie, I don’t even know if this really works. Everyone says it does so we just went with that. Maverick has been wearing his since he was 4 months old. So we haven’t had the pleasure of experiencing him teething without it, but if he’s teething this badly with it, I definitely don’t want to see how bad he is without it.

We usually always have a bag of frozen berries from either Trader Joe’s or Costco. Mav also loves frozen bananas!

We bought ours on Amazon, because well prime. We also like this oil because it’s all natural and does a better job unlike Orajel. 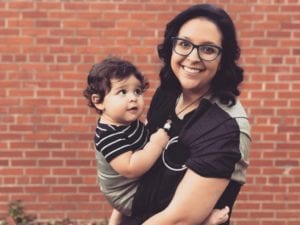 This is mainly for mama to wear, but we’ve found a locally owned Etsy shop called Roadie Baby. She has super cute necklaces that are staples in my wardrobe and also lifesavers for Maverick.

Wet a washcloth, freeze it and baby willing, I’ll rub it gently on his gums to exercise them. This one usually is a hit or miss though. Also, if you’re in a pinch, just run it under cold water!

Mav loves this little teether, but my only negative about it is that if you throw it in the diaper bag, fuzzies or dust will get stuck to it no matter how clean you think the bag is.

Freeze breastmilk in a Popsicle mold, or cut a small hole (needle sized) in a pacifier and squeeze it in a small bowl of breastmilk and let it fill up, then freeze that bad boy.

We bought this when Maverick first started teething to hold all of the frozen fruit, and he loved it.

I made some popsicles with frozen berries and almond milk. They were quite the hit, but if you don’t have time to make any, store bought ones are just as delicious.

For the obvious reasons.

Only if you don’t have #4 on hand. This is a great alternative to rub on your LO’s gums! I only use YL though, since it’s consumption safe.

Either homemade or store bought!

These are just a few things I’ve found that has helped us during this season in toddlerhood. Hopefully, they’ll help you out as well if you’re out of ideas!

Lastly, don’t forget to breath, mama. You’re not in this alone, reheat that coffee and conquer the day.