Y’all! We won! What an exciting game! I have to admit that after Sunday night’s performance, I almost upgraded myself to a mostly interested but still amused wife of a LSU football superfan. It was certainly a magical night, and in more ways than one. I know I like to joke about my husband Matt’s obsession, but I was also raised in a family full of LSU superfans. Fall Saturday nights during my childhood were mostly spent watching (sometimes just listening to) LSU football at my grandparents’ house with dozens of family and friends.

This past Sunday, we recreated one of those nights to celebrate my grandparents’ anniversary. My girls got a glimpse into how being an LSU fan brings families together. My uncle taught them that yelling “Gimme a ‘T’!” can get the crowd going, and listening to my dad call them “eclipse” every time they walked in front of the TV made me giggle remembering how many times he called me and my cousins that while growing up.

We are taking our six year old daughter to her first game in Tiger Stadium this Saturday, and my husband and I can’t wait to share this milestone with her and further indoctrinate her in the ways of LSU football. It’s the first home game of the season so there is sure to be enough excitement to keep her interested but not enough excitement that I would have to shield her virgin ears. (LSU fans are nothing if not passionate.) So, on that note, let’s discuss what our passionate superfans care about the Southeastern Louisiana game.

Joe Burrow is the quarterback that LSU has been missing for years.

I asked my husband how he felt about Burrow’s performance, and he responded “His stats weren’t very impressive, but his confidence and ability to call plays at the line of scrimmage put him on another level.” But all I heard was “Maybe he’s no Romeo, but he’s my loving one-man show.” And even though my three year old wet her pants at the exact moment of kick-off and I was watching the other three year old poop in the bathroom for 20 minutes of the game, I managed to catch enough of his performance to agree. I don’t know much about football, but I do know about hot messes. And this was one of the first games in a while where the quarterback didn’t look like me when I bring four kids to the Knock Knock Museum by myself. So now that we know Burrow can lead the team on the field, superfans want to see some more aggressive passing this week against an un-ranked SLU team.

Kicking no longer seems to be a problem. 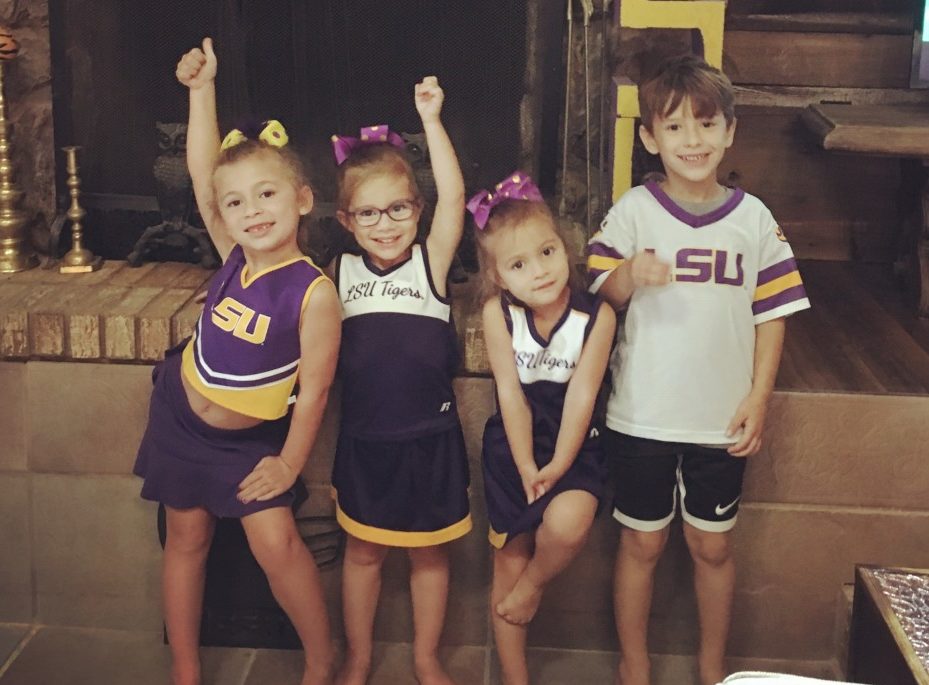 So, apparently last year was one of the worst kicking years in over a decade. (Yes, superfans have statistics on everything.) When my husband was giving me his thoughts on the game, he said he didn’t have as much kicking anxiety now and could finally relax. Poor thing. Who knew that he had been silently suffering this whole time? I’m so glad he is finally getting some relief. Somehow between cleaning pee and conversations with a pooping toddler, I was able to witness an incredible 54-yard field goal. It tied the school record and made a room full of superfans lose their minds. Matt says kickers rely on confidence more so than skill, which makes sense. Unlike any other player on the team, if they screw up, there is no one else to blame. LSU’s kicker made four field goals in a row, so he is ready to take on the world like a freshly showered mom with a fully organized color-coded planner. There’s not much that could shake that level of confidence.

This week’s game against Southeastern Louisiana University should be an easy win.

Ask any superfan and they will give you their prediction for the season. My husband has penciled in a “W” for this game, and so it shall be. There is a different endgame when it comes to these non-conference games. It’s not so much about the win, it’s more about how they win. Matt says he wants to see LSU “put away the game” in the first half. Then he expects the second half to be a great time to watch some of the younger, less experienced players. This would probably be a good game to have friends over or, like us, take a younger child to Tiger Stadium. Your superfan will be a little more willing to take their eyes off the field for a few minutes here and there.

I hope this helps you endure week two without too much eye rolling. I’m looking forward to a fun Saturday night at Tiger Stadium and watching my six year old’s reaction to all the excitement. The season is looking up, so “let’s hear for the boy(s)!” (Ha! You know you still had that song in your head.)