I prefer to find the good in every experience, so I will start with what I loved about last Saturday. Our game day shenanigans began at 11:30am with my superfan husband, Matt and I attempting to pick up my 21 year old brother and our two cousins at his apartment off of Brightside. By the time we painstakingly made our way down Lee and over that railroad track at Nicholson (after my husband almost lost his mind because the driver in front of us was too busy kissing her dog to notice the green light), we were informed that my brother’s friends were headed to his place to park and then walk to the game because there was no more parking on campus. My 39 year old body started to panic, so I entered a state of denial. “There is no way parking is filled up. It is only noon,” I told myself. I convinced six giant 20-ish year old guys to get in the minivan. We were going to find parking. We approached River Road and saw that the traffic was backed up to that point, and Matt reluctantly turned the minivan around. 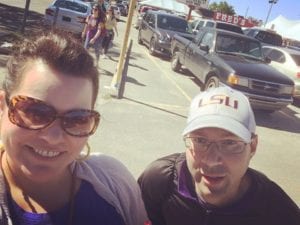 Walking 2.5 miles through Tiger Land and down Nicholson was not exactly how I pictured my game day starting, but I have to admit that I had a blast. First of all, my brother rarely graces us with his presence anymore (like most 21 year olds), so that 45 minute walk was probably more uninterrupted quality time than we have had all year put together. Second, Matt and I had fun revisiting our old stomping grounds and reminiscing about our college nights at Fred’s and Sports (because why was it renamed after LSU’s automated scheduling system?). I mean, that is where he witnessed 21 year old me fall down the steps on the Fred’s patio without spilling my drink. Obviously, that is the moment he knew he would marry me. Once we reached our tailgate spot, I was finished with my roadie and well on my way to tailgating our team to victory. The rest of the day was a blur of excitement and camaraderie … yada, yada, yada … the walk back to the car through Tiger Land was brutal. (Yes, I just yada, yada, yada’d over the loss.)

Regardless of the outcome, there is nothing like a super-charged game day on LSU’s campus. Matt and I chatted with numerous Bama fans who all had the same thing to say. The LSU game day experience was why they were there. So even though LSU lost, you can let your superfan know that they put on quite a show and did everything they could to help their team to victory. And while there is a lot of talk about why the game was lost, my superfan would rather look to the future and discuss what the season as a whole will look like.

The LSU-Bama rivalry needs to be over.

LSU hasn’t beaten Bama in eight years, and the rivalry no longer feels legitimate. Matt thinks that it’s time to take this yearly match-up down a notch and look at it as just another game. There is too much time to think about it because of the bye week. (I have no idea why a week off in sports is called a “bye week.” Maybe, the week is all like, “I need a break from you. Girl, bye.”) Also, CBS gives the game a special time slot to draw even more attention to it. It’s too much pressure to put on one game. Fans consider it a defining moment of the season when, in reality, it is only 1/12 of the whole picture. Currently, the team is 7-2 and ranked 7th in the country. That kind of report card deserves to be proudly displayed your mom’s fridge not thrown into the fireplace.

There are still more SEC teams on the schedule that we need to beat.

LSU plays Arkansas this weekend, and my superfan husband says they are better than their record shows. Coach Orgeron is great at getting his team to bounce back, and that is really important for this weekend. Arkansas has a history of derailing the season even when no one considers them a threat. Speaking of non-legitimate rivalries, this game has a ridiculous trophy that no one really cares about. It’s called the Golden Boot, because Louisiana and Arkansas make the shape of a boot. I mean, they make trophies for everything these days. Matt was even able to find a “Best Ugly Christmas Sweater” trophy last year. He won it, of course. But that’s a story for another post.

A “New Year’s 6” bowl game is a possibility.

Just when you think the season is almost over and you can go back to having a Saturday, they start talking about who might be playing in what bowl game. I don’t quite know the point of all these extra games after the season is over. Being “bowl eligible” is supposed to be an accomplishment, but there are 41 bowl games and only 129 teams in the division. You do the math. Not every bowl is created equal, though. Apparently, there is this thing called “New Year’s 6” bowl games. These six games include three games that act as playoff games for the national championship game. This year, some of the games are on Dec. 29, so I don’t know if the title quite works. Regardless of the nonsensical way they name groups of bowl games, Matt thinks there is still a chance LSU could play in one the “New Year’s (or New Year’s Adjacent) 6” games. Crazier things have happened. Ask your superfan about LSU’s road to the National Championship during the 2007 season.

Hopefully, your superfan is on the way to recovery after last weekend’s loss and a few therapeutic nights of re-watching the game. (That always seems to help mine.) LSU only has three more regular season games, so it won’t be much longer … until you’re stuck watching a month of bowl games that can take place on any night of the week. Sorry, it’s going to get worse before it gets better. 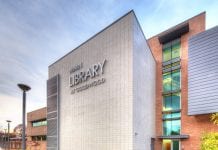 The East Baton Rouge Parish Library Has Moved Into Phase 2 of Re-Opening :: What You Should Know! 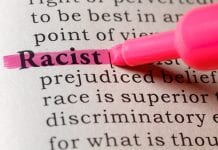 I Realized I Was Racist