I remember it like it was yesterday – the call from the pediatrician informing me that she had referred us to Children’s Hospital in New Orleans. 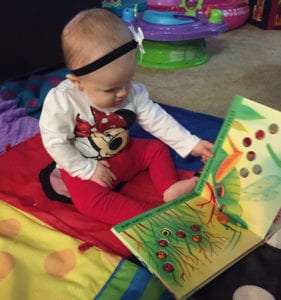 When Salem was 9 months old, I noticed that she was sitting strangely. It wasn’t a normal slouch, but was more like she was almost sitting on her lower back instead of her bottom. I didn’t know if I was overreacting or if it was something worth looking into. We brought it up at her next appointment, and the doctor scheduled X-rays to see for sure. That’s when I received the call that it was more severe and we needed to see a specialist in New Orleans. In a moment, something that I had never even imagined became an every day part of our lives.

She was diagnosed with Infantile Scoliosis and her spine was curved a little over 60 degrees in an S shape, which you could barely tell by looking at her back. I had no idea that infants could have scoliosis. Because growth in children under three is so rapid, the effects can be devastating if not treated. A casting method is commonly used to correct the curve or slow the progression until surgery is possible (if necessary). Salem got her first cast just after her first birthday. 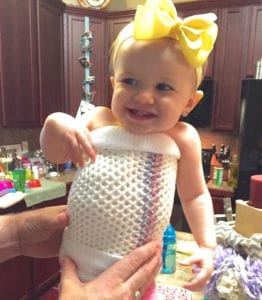 Over the last year and a half, Salem has had one MRI (which showed no other complications) and eight casts applied. She’s been under anesthesia each time and has had countless X-rays. The upside to our casting journey has been a new waterproof material used for her cast. It has allowed her to bathe and swim where she wouldn’t have been able to with the traditional material. She learned to walk in the cast and to maneuver her upper body certain ways despite not being as flexible. In June of this year, her spine was down to 37 degrees. 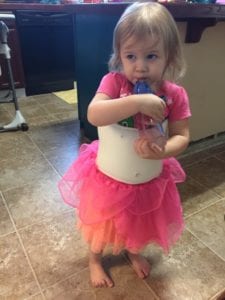 In September, we moved from a cast to a brace which sticks out from the bottom of her shirts more than the cast did. Recently, someone noticed it and asked, “What’s wrong with her?” I wasn’t upset by it, but it definitely caught me off guard. I just hadn’t been approached that way about it before. It’s something we’ve lived with for the last year and a half. It’s our normal. Sure, at the beginning of this journey the phrase “something is wrong” may have crossed my mind, but now this is just Salem – a two-year-old who loves all things Disney Jr., building block towers, and singing. Oh and she just happens to have a curved spine, knows how to spot an X-ray and lives in a cast/brace – a treatment method that is a small inconvenience compared to a variety of other potential issues in her future.

In November, we all talk a lot about gratitude. Maybe it’s sharing one thing around the family dinner table or writing it on a paper turkey. We have a lot to be thankful for. I am reminded daily of the thanks I have for advances in medical treatment and a fantastic doctor. For supportive family and friends. For other encouraging families who have also experienced this diagnosis. And for a daughter who has a “go with the flow” attitude, who is full of joy, and who is a walking reflection of God’s love and provision.