My 3-year-old LOVES KidTube, the kid-friendly version of YouTube. In all honesty, she spends way more time on the iPad than I would like her to, but in these past few months, we have gone through our home being flooded, a pregnancy that landed me on bedrest for a while, and going in and out of the hospital after delivery … not to mention bringing a newborn home and already having another baby under a year old. Whew. I’m exhausted just thinking about the last six months. 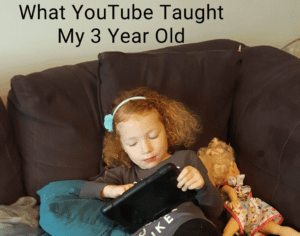 Needless to say, I’ve needed a nap or two during this time. She has started saying, “Mommy, can I watch my ‘bideos’ while you nap today?” And while we are beginning to wean off of the videos as we adjust to our new family, here are a few things YouTube has taught her:

1. To have creative play

Most of the videos she watches are of kids playing with their toys. As strange as I think this phenomenon is, she has begun to make up new and interesting scenarios during play time. She is the captain of a ship being attacked by pirates or her babies are going shopping at a new store; her Barbies have run out of clean clothes or she is driving a car with her imaginary friend. Some of this may be age appropriate development, but it has also lengthened her creative reach.

2. To have independent play

While she used to play independently for a short period of time, she would always want me to join her way more quickly than I wanted to. Now, she has learned to interact with her toys as if they are interacting with one another. The creativity that she learned allows her to be content on her own for longer stretches of time.

3. To descriptively explain her thoughts and actions

As a former English teacher, this one gets me so excited! Her verbal skills have improved. She sat at the table doing arts and crafts the other day and was explaining what she was doing and why she was doing it every step of the way, as if for her video audience. These skills are precursors for creative and expository writing as she gets older.

While she can’t quite ACTUALLY fix her unruly curls, she is willing to try and is asking for my advice in doing so. She patiently stands in front of the mirror, adding water and products, combing out the knots and adding accessories. She has found something that she enjoys doing, and is using KidTube as a resource for expanding her skill set. She now says she wants to be a “hair dresser and makeup dresser” when she grows up.

While I don’t think that KidTube should replace books, experiences and conversations, I look at my girl and am pleasantly surprised at how much she has changed and grown. Today, I’ll cut myself a little slack knowing that my survival tool hasn’t ruined her life!