Every August, my husband and I (we are both teachers) make our annual shopping trip to the mall for some school year clothing staples. The kids get their wardrobes updated each July, but we have to wait until our second August paycheck, after we spent the first one on the typical back-to-school demands: supplies, shoes, school fees, and uniforms. 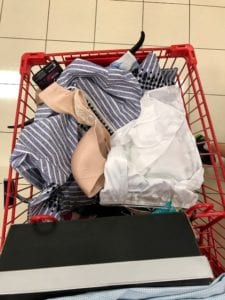 We decided to divide and conquer. He took the boys with him to the men’s department while I had the girls with me. I quickly grabbed pairs of pants, blouses, and dresses, each of various sizes, to haul into the fitting room with me because I had no idea what size I am. Always pressured for time, I squeezed in and out of pieces as quickly as possible before going back out into the fray of clothing items. For all I knew, I could’ve been any size from 2 to 12.

I tell people all the time that I’ve been either pregnant or nursing for the past decade, sometimes only half joking. My oldest will be 9 in October, while my youngest is 8 months. My closet looks like it has an identity crisis. I have various pieces in all sizes, but I’ve mainly been picking from my maternity section, awkwardly mixing with some cheap tops that are usually too tight for my nursing body.

I’ve never “invested” in my wardrobe before mainly because I knew my body was going to change. The last time I had a predictable shape was in college, and the times have surely changed. I’d give anything to go back to some cords pants with Birks! But now I have a big girl job that requires big girl clothes. And big girl clothes are expensive. Like most moms, I usually put myself last so much that when I do bring myself to finally go shopping, it becomes an epic trip.

This year I dropped about $500 on clothes and shoes just for myself.

That may not seem like a lot to you, but for two teachers with four kids, I couldn’t help but think of how many weeks’ worth of groceries that amounts to (Like two!). And every single item was marked down!

When I met back up with my husband, I saw his eyes widen at my load and warned him to “mentally prepare himself” for the total. I followed up with a stern “And don’t make any comments!” (Like a good sport, he only made one joke about having to eat bread and rice for lunch). When he asked how on earth I could possibly need so many clothing items so often, I snidely replied, “Because I’ve had like 17 different bodies since we got married!” He’s had maybe two: pre-Navy Boot Camp and post. And don’t get me started on men’s fashion trends vs. women’s … !

I never decry my body because I know how it works, and I know what it takes to get it back into a healthy shape. I know that when I’m nursing, my body holds on to about 15 more pounds that tend to come off easily when I wean. I don’t mind making physical sacrifices for the temporary seasons of pregnancy and nursing. I just hate the unpredictability and the expense.

I ended up getting shoes, underwear, dresses, pants, shirts, Spanx (duh), and I even splurged for a new bra, which you’re supposed to replace every six months but more realistically has looked like “every new kid” around here.

And while I was excited about having clothes that fit the way they should, I admit that I counted the number of remaining months of nursing before I have to repeat the entire process yet again. Because that will be Body Number 18. Ugh.