So I’ve been a single mom for over two years now. That feels weird to say because it feels I’ve simultaneously been single forever and that I’m brand new to this. Anyway, my point is, I’ve resorted to the dreaded world of online dating for the past 6 months. Actually, it’s a funny story. My BFF took my debit card out of my wallet and registered me on Christian Mingle during our crazy Cinco de Mayo night out. But, I mean, it’s CHRISTIAN MINGLE how bad can it be right??? Well, here are the times (when in the roughly 20 first dates I’ve been on) I knew these guys weren’t the ones*. I promise you, I’m not just a harsh date… 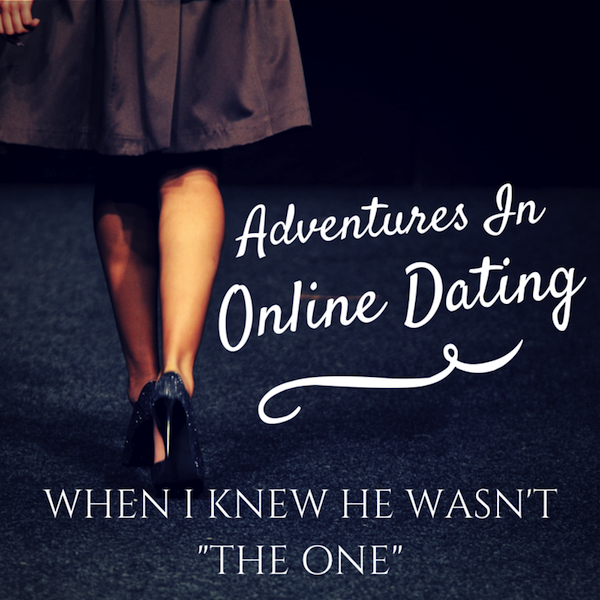 “The unexpected and uninvited pic guys.” WHOA! Hey there. I have children you know. They do know how to work a phone since they were born after 2005. Also, eww. Please. You think THAT’S going to get me all excited about you? Seriously? I’m a mom. Send me a pic of a cleaning lady and I’ll get more excited. (Just so you know this happens so frequently that the site of a stranger’s package has literally no effect. You’re not special.) Buh-bye! 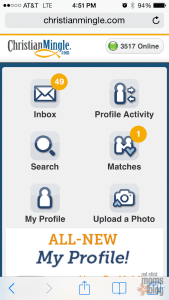 “Crazy story guys.” Your millionaire ex-fiancée who worked for the British Royal Air Force got amnesia in an accident right before y’all were reunited and you spent a year trying to help her memory return? Oh that’s so sad (I think I saw that in a movie once…) Wow! You were stalked by a Mexican gang for years and narrowly escaped death several times? OH, they’re still after you so you occasionally have to go into hiding? I’m so sorry this has happened to you! (Yeah, you need medication or police protection, I’m not sure which, not a girlfriend.) You are an ex-MMA fighter and a current motivational speaker, but you’re not google-able because you interviewed with the CIA so they erased your web print? (Yeah. That CIA thing is SO overplayed.) Adios.

“The ‘you’re almost good enough’ guys.” Apparently (and I’m just going by what I’ve been told, so don’t shoot the messenger here…) when you’re almost 30 and have children, your ex got the absolute best you and no one will ever be able to enjoy you again. You are also not allowed to skip any gym days or eat cake. Ever. And your wardrobe needs to be this way or that way and your hair would be better blonde instead of red. But other than that you are absolutely perfect and they want to spend the rest of their life with you because you’re freaking amazing! PSSH. I just can’t even with that one!

“The way too single guys.” This is the guy who has embraced the single lifestyle so hard that any attempt to get him to understand a life beyond that is just useless. I mean, when a guy tells you, “I wanted these lights in strip club purple, but these are more LSU purple,” it’s a bit obvious that we have different decorating (and lifestyle) preferences. And to the guy who flies to Vegas every weekend… Well, enjoy that. I’d hate to take you away from that little piece of heaven with my mundane lifestyle. ‘Cause weekends with me will include a movie, pizza, and a board game (and sometimes my kids). Just sayin. 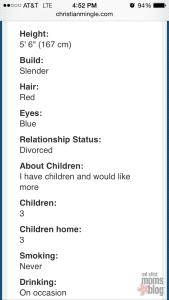 “The barely single guys.” There is also the opposite. I mean, I’m freaking awesome. I’m not really worried about the competition, but when you tell me that you’ve been separated for 2 months after a 15 year long marriage I’m going to have to pass (because I don’t like to set myself up for failure. That would be stupid.) Also, if you tell me your daughters get super jealous of any girlfriend you have because they wish you were back with their mom and will make sure I know it, I’m out. (It may have been cute in the Parent Trap, but I also actually SAW the Parent Trap. The girlfriend lost.) Sorry. You’re a cool guy, but… No.

“The just got out of jail guys.” True story. They happen (even on Christian Mingle) and while I admire your honesty with your “Hey, sorry we haven’t talked in a while, I’ve been in jail…” texts, I’m gunna have to say no. Maybe I’m too southern, maybe I’ve watched too many episodes of “Who the bleep did I marry?”, maybe I’d just rather not add any more risk to this anonymous dating thing. I hear the word “jail” or “parole” and I’m kind of done. A girl has to draw the line somewhere. I wish you all the happiness (and good behavior) in the world!

Oh there are so many stories (I didn’t even mention the guys who apparently think they still have a chance with a 29 yo in their mid 50’s and 60’s) I’d have to write a book to share them all. Ladies, a word of advice: If your hubby is driving you nuts and you think it would be easy to just replace him, come back and read this article for reference and make sure you hug him extra tight. If you’re like me and can’t escape the single lifestyle, well, just stay away from Christian Mingle if you’d like to keep your sanity. Guess I’ll head back out into the dating world again. Wish me luck!

*All of these stories are absolutely true and have absolutely happened. No exaggerations have been made and names maybe should be included to protect the innocent women who may come across their nasty paths.

Have you used online dating sites? What has your experience been?