Before my son was born, when the question came up as to whether or not I would breastfeed him, the answer was always a resounding YES! Breastfeeding was something I very much wanted to do for him. (Ha! Parenting is SO easy before you actually have a baby.)

Our son surprised us by coming almost six weeks early. I was still reading the pregnancy books and hadn’t yet moved onto the “now-I-have-a-baby-what-the-heck-do-I-do?” books. Fortunately, he didn’t have to spend any time in the NICU but as I worked through the shock that my baby was actually here, I also struggled to breastfeed. 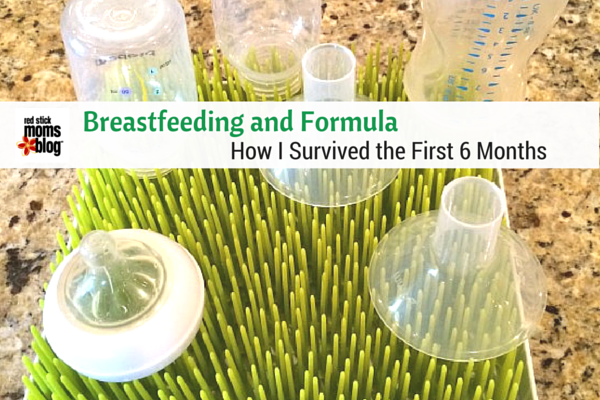 The nurses and the lactation consultants kept telling me “He’s a preemie; it will take him a little longer to figure it out, but it will happen.” As the hours ticked on and his glucose levels started dropping, I finally agreed to give him some formula and start pumping. This was not how I envisioned breastfeeding going but it was the right option for my son at the time. As our stay in the hospital was nearing an end, and still no breastfeeding success, another lactation consultant saw me. She told me that even though it was already starting to become a routine to pump and then bottle feed him the expressed milk, it was not ideal to go down the road of exclusively pumping.

Well, the hours turned into days, and the days into weeks and still, there was no proper latching. It was like a piranha constantly attacking me. OUCH!! After seven weeks of attempting to breastfeed my son, then feeding him with previously expressed milk, then pumping, then cleaning the pumping pieces, and then immediately starting the process all over again, I had had enough. It was still important to me to provide breast milk to my son but since my sanity was at stake, I stopped attempting to breastfeed him.

I have always said that if I got the opportunity, I would write about my experience, in hopes of helping and encouraging other moms who also made this decision. I’m sure there aren’t many moms who also go down this road but I know I’m not the only one. Having gone through it and coming out alive on the other side, here’s what I would pass along:

I thought I had done everything I could do to make breastfeeding happen; saw lactation consultants, read books, talked to my pediatrician, talked to experienced mommy friends, but it still didn’t help. It wasn’t until we moved to Baton Rouge and I had stopped pumping that our new pediatrician asked me upon examining my son if I had had trouble breastfeeding. I’m so creeped out! How did she know? “He’s tongue-tied,” she told me. Tongue-tied?? I had no idea that was even a thing, let alone something that would impede breastfeeding (looking back, it was naive that I didn’t know but I didn’t know). Turns out, I’m tongue-tied too and breastfeeding didn’t work for my mom either. It makes me mad that I saw so many specialists and NO ONE identified his problem for me. Everyone told me he wasn’t latching because he was a preemie. So, if breastfeeding is important to you, don’t be afraid to get a second opinion. Keep going back to the lactation consultant. Get a new lactation consultant. Ask every question that pops into your head.

If all the options have been exhausted and you’re heading down the pumping road, you most definitely need someone to talk you off the proverbial ledge. I wanted to quit ALL THE TIME. The idea of being hooked up to a milking machine 5 – 8 times a day was sometimes too much for me to handle. The person that kept me sane was my husband. I still don’t know how he managed to be encouraging in a way that didn’t make me want to scream “What do you know? You’re not hooked up to this thing!” It can be anyone that knows how to make you feel better but you need a person.

I needed a goal for myself or I really would have quit. I needed to know that being hooked up to a machine wasn’t forever and that I was working towards an end. For me, it was six months. Just get to six months. If I had had construction paper, I would have made a paper link chain to count down the days but I settled for a countdown app on my phone. I opened it often. Some days I would think “82 days?? Wasn’t it 82 days two weeks ago?” and other times I would think “I’m getting through this. The end is in sight.” The thing that truly kept me going was my son but I also needed the additional encouragement. The day he turned six months was the day I stopped pumping.

After several weeks of pumping, I finally got to a point that I was just far enough ahead that I was solely feeding my son expressed breast milk. This felt awesome. I felt like I could actually achieve my six month goal. And then I got mastitis. Are you kidding me? This is hard enough as it is and then there’s mastitis? I was disappointed because my supply never fully came back. All the Fenugreek in the world couldn’t have helped. At that point, I had to accept that he would need some formula again and that was okay. It was okay because my son was getting fed and I was doing the best that I could for him.

Find Something Just for YOU

Another thing that helped keep my sanity during my six months was finding something to do during my pumping sessions that was a guilty pleasure. Whether it was browsing Facebook, reading a magazine, or even napping, I did something that I enjoyed. I briefly went back to work after having my son and unless it was an extremely busy day, I took that pumping time to relax and leave work on the other side of pumping room. An added bonus about pumping at work is that NO ONE is going to barge in on you and interrupt you. It was the only time during my day that interruptions didn’t happen and I actually came to enjoy those work-time pumping sessions.

Do What’s Best for Your Family

It’s important to realize that there’s no such thing as the Pump-Olympics. There’s no medal for making it to your pumping goal or a trophy for the mom who pumps the longest. At the end of the day, it’s just you and your family. Do what is BEST for your family and if that means you need to stop pumping, then stop pumping.

Whether you breastfeed, formula feed, or you walk the line, just remember on those days that seem insurmountable how much your baby loves you. And momma, you’re doing great!