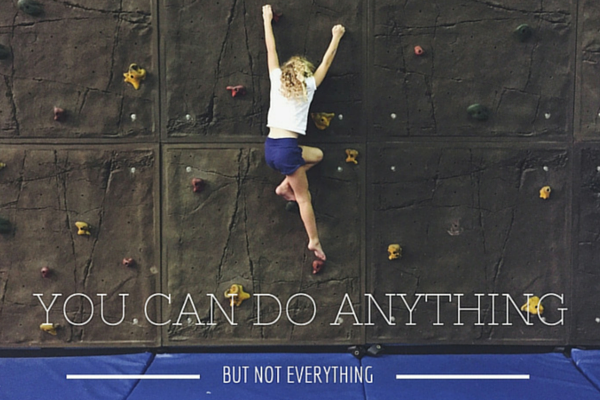 I was scrolling through my Instagram feed and I ran across this quote: “You can do anything but not everything.”

I paused. The rhythm I’ve developed when I scroll doesn’t include stopping at the quotes. I follow some design feeds because I love to be inspired by beautiful things so when the quotes show up, I usually scroll… faster. NEXT. But this one stuck with me. I’ve been thinking about it ever since.

The first four words are easy to digest, “You can do anything.” Of course I can. Sure I can. ANYTHING. I’m so happy that it’s not a new concept for me or my generation. My parents weren’t necessarily intentional about having me believe that because it just WAS. I felt it. I’m consciously passing along the idea to my children, weaving it into the fabric of our everyday. Living in possibility is one of my joys as a mother.

But that second part – the “…but not everything.” That was so… unexpected. I mean, I read the whole quote in a flash and actually had to go back to it because I read it before I digested it. I thought it was just some lame, inspirational quote. “You can do anything…blah blah blah.” You don’t have to take out the pitchforks, because I’m *still* going to think most inspirational quotes are lame. That’s why I like this statement so much – because it’s not inspirational. It’s real. I can see the .gif now – someone is wide-eyed and hopeful, eyebrows raised, smile widening, looking up and up and up because they are *so* inspired and then WHACK! A smack in the face – back to reality. That’s what this quote did to me. It smacked me in the face, in a good way.

I can’t do every anything.

That’s not limiting. It’s an encouragement to focus. It’s permission to be great.

As a working mom, I often feel like I’m expected to be everything. I think the quote would still work if I changed it up a bit: “You can BE anything, but not everything.” Geez. Let me type that again for full effect.

“You can be anything, but not everything.”

I think I needed to hear that today because it’s NOT limiting. It’s freeing. I give myself permission to focus, to turn down some of the “noise” in my life, to simplify.

I can do anything.
I can be anything.
Everything else will have to wait.