As soon as he got in the van, my son confessed that he got a mark at school (a note for having done something wrong). He mentioned that there was “kind of an interesting story” to go with it and proceeded to divulge that when his class was walking to lunch, he saw the teacher’s lounge, usually very visible with glass walls, covered with paper from ceiling to floor. Overcome with curiosity about what could possibly hide behind the paper, he tried to pry a piece of the paper away from the wall to sneak a peek. When he did this, the duty teacher, someone otherwise unknown to him, told him not to look. Demonstrating his characteristic genuine, innocent, unending curiosity, he replied, wide-eyed, with, “Why?” 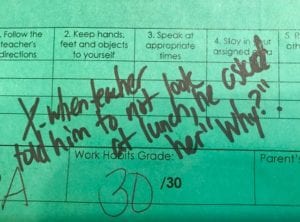 What he couldn’t realize that I pieced together is that next week happens to be Teacher Appreciation Week, and I know his school goes over-the-top decorating and making it as special as they can, as special as the teachers deserve. Wanting to avoid the inevitable distraction, I’m guessing someone wisely covered the decorated lounge. It revved my son’s inquisitiveness into overdrive.

This questioning was not received well by the duty teacher. She perceived his curiosity to be disrespectful back-talk, what many may call “sass.” Exercising her authority, she issued him a mark, which then got noted on his weekly report home and communicated right there in carpool pick-up. I don’t blame the teacher. Being a teacher myself, I know how frustrating these tiny moments of simple disobedience stack up in a day.

It was a sticky situation. He didn’t see me roll my eyes. Instead, he heard me correct him, saying, “Ok, when a teacher gives you a directive, just say, ‘yes, ma’am’ or ‘yes, sir’ and then if you really want to ask, try to find a respectful way. Maybe ‘Yes, ma’am. I’m just curious!'”

I could feel that this wasn’t fully satisfying his confusion about the situation, and I was also feeling the need for more development. I continued, “Unfortunately, when people don’t know you well, they tend to assume bad things about you. They might think you’re trying to break the rules or you’re up to no good. I know you probably weren’t trying to be disrespectful, but that’s what she thought when she saw you doing what you were doing.”

And that was it. That was the end of our conversation. We could safely end the conversation there because nothing was at stake. He defended himself saying that he worked hard all month to earn a reward for good behavior and was sad that he probably lost out on it by getting a mark. But this was a minor inconvenience, nothing more. This assumption about his character by someone unknown to him in no way hindered his success or his physical safety. And it was an absolute punch in the gut to think about how different that feels for my African-American friends raising boys. 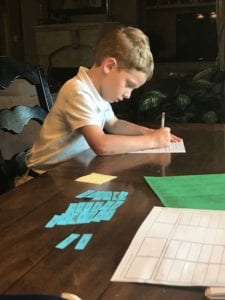 In the same unfair way that little girls have to learn about being more aware of their environment and how to avoid assault, little black boys have to learn the lesson of preservation and obedience early and often. They have to be taught that this very type of situation could escalate into something real, dangerous, and ultimately life-threatening. They don’t have the luxury to state their case, even politely. Instead, their only option is full compliance, with even that option potentially being dangerous. The only threat to my son was a “mark.” Others may face weapons.

My little boy was assumed to be disrespectful and defiant because he was disobedient and unknown. There was no time for relationship development. There was only directive and response. His very character, well-intended as it may have been, still directed him to make the wrong choice. But I didn’t have to turn the conversation in the direction of life and death. I could have, sure, but I didn’t feel a societal pressure or need to in effort to protect his life in a later, similar situation. The only reason I’m even aware of this need from other races is by listening to and respecting their experiences, not discrediting them.

I was and am privileged not to have to have that conversation with my sons simply because of the color of their skin. I know that for unfortunately-similar reasons I’ll have to have uncomfortable and unfair conversations with my daughters (though conversations about consent happen often with my sons!). I’m acknowledging the double-standards, but I admit it feels so insufficient. I just wish I could do more. Until I can change the world, I’ll work on teaching my children to recognize privilege and to know and do better.