Cracks and All {One Year after the Flood} 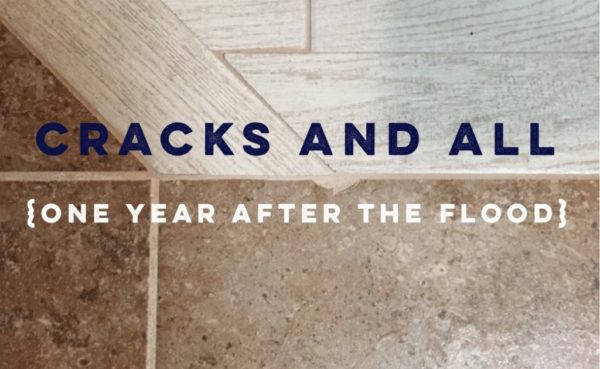 As our new floors were being finished a little over a year ago last October, I took this picture. The larger tile square had been cracked while pulling up the carpet wooden room dividers in the living room. Jeff, who had laid our new wood-tile floors right up to the existing kitchen tile, mentioned we could just replace that one square with the missing chunk. I wanted to leave it – partly out of laziness, but mostly because of what it represented. There was something about the old and worn right next to the new that caught my attention.

A year ago we flooded, and what has been a whirlwind of a year has brought many changes besides just flooring, paint and furniture.

My husband finished his degree in May and hadn’t found a new job yet by August. The part-time job he did have allowed him to work quickly, along with help from great people, to get our house livable by October. Around that same time, I was given (and took) the opportunity to transfer to another job in a new field. My dad passed away in April, and a month later, I found out I was pregnant with our third child. Last month, my husband finished an alternative teaching certification program and has since started teaching.

What we have gained far outweighs the things we have lost.

We have received so much kindness from loved ones and strangers alike, much of which can never be repaid. Bonds with people around us have grown stronger. And all along the way, we have gradually put our home back together, and even better than before, with a few minor things leftover. Our three-year-old recounts the flood and refers to our “new house” often. To say the last year has been a blur would be an understatement.

As we sit on our new couch atop a new rug and floors in a room that had different paint a year ago and watch our kids, who seem to have grown so much in that instant of a challenging year, I think there is a lot to be thankful for despite that unfortunate event. Would we still have gotten here in this same situation in this moment, just as thankful, only surrounded by all our old things, if the flood hadn’t happened? I don’t know.

But that cracked tile that butts up against a brand new one is a reminder of both the pain of a difficult time and the beauty that can follow – and neither is as appreciated without the other. 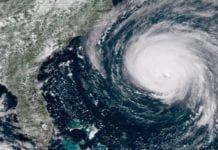 To Our East Coast Friends :: What We’ve Learned About Post-Storm Clean up 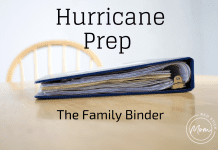 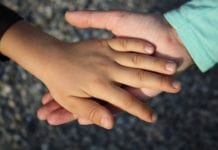