When I heard about your death, I was cooking barefoot in the kitchen. 2020 is full of irony. My children were there. One was at my leg, clawing for my attention as I poured the dried macaroni noodles into a boiling pot of water. The other was circling the island with a beach ball and a plastic bat, laughing gleefully about Paw Patrol and powers. I was less concerned that his ball would hit my glass of wine than I was about him hitting his spiraling baby brother. My phone lit up. I checked it, hoping it would be an Amazon order. I screamed. 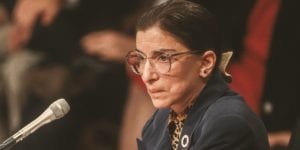 Then came the cry. It came from my belly. It made my nose flare up. I could barely recognize my own voice despite being a regular over-reactor. My children looked up at me, knowing the games were over. I dropped my phone like a coal from which I underestimated the stinging heat. I could only make one syllable exit my mouth – No.

You and I disagreed on some issues, there’s no doubt about that. But never in my years of reading back opinions that fell on the other side of my religious views did I mistake the importance of your place on the Supreme Court of the United States. Never did I worry that beneath your frilly dissent collar beat a heart of a warrior vigilantly watching for gender discrimination, ready to pounce with the full force of the United States Constitution.

I grew up dreaming. I dreamed without limits. I plotted career paths at my all girl Catholic school in a small town. I thought about marriage and family, but I never lost sight of what I wanted to contribute to the world in other ways. I highlighted course catalogs in college without hesitation. I took classes with predominantly male enrollment and didn’t bat an eye. When I grew older, I saw the glass ceiling, but knew it was just that – glass. It was flimsy and breakable, not bulletproof the way it was when you approached it. My childhood and adolescence is a testament to your work. 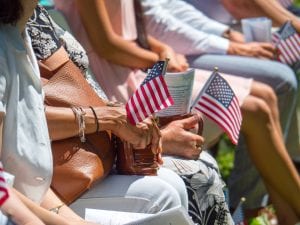 I stand here today with many female former students who have bravely decided to serve their country. I don’t remember a time before United States v. Virginia (1996), when state-supported military institutions could refuse to admit women, but history will. I in no way hid my pregnancies from my employers but rather was celebrated, cared for and guarded as I took my maternity leave ladened with depression and anxiety, and I returned to work with open arms. I was not alive for the first draft of the Pregnancy Discrimination Act, but history remembers. I’ve held adopted children of my LBGTQ+ friends and attended marriage ceremonies with two grooms. I’m starting to forget a time before Obergefell v. Hodges, but history remembers. I’ve watched people with disabilities achieve their dreams. I’ve watched parents with medically fragile children celebrate their enrollment in school. I don’t go to bed worrying that my children will be discriminated against for any physical limits they are faced with. I don’t really know a world without Olmstead v LC (1999), but history does. History doesn’t forget.

Who are we? The ones left in your wake. The ones who see that our country is not as much of us vs. them … but we. It’s always been we. It’s… we are different, but our similarities bind us. It’s… we are broken in places, but are fighting to be repaired. It’s… we disagree, but the law informs us. It’s… we are all Americans, and our freedoms are fragile. 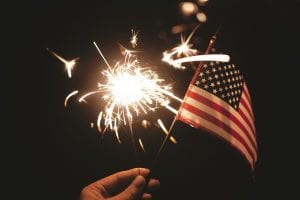 Do you know what else is on my kitchen counter now splattered with Velveeta cheese, wine droplets, and tears? I have a laptop that holds a manuscript about a little frizzy-haired girl going on adventures. It’s currently under consideration with three different agents. I have a Canon camera that’s dusty from the back fields of some pasture as I try to grow my very small photography business from scratch. You’d be happy to know I am all booked up for this fall after only being in business for three years. I have a stack of papers dealing with the American Revolution that need to be graded. They don’t really understand the concept of popular sovereignty or limited government yet, but they will. And I have my children’s brightly colored plates from Target with the remnants of macaroni and cheese. Marshall from Paw Patrol is there too. I think you know why. Because I can be all of these things as a woman – a wife, a mother, an employee, and a business owner. I couldn’t have that without you. Thank you.

Because I can do anything I want. Watch me, Ruth.