Today was a scary day. As any normal day, I was home with my three kids (ages: 8, 5, 3) and our ginormous dog. We’d been out and about most of the morning, done our school work, and we’d enjoyed some time in the outdoors and had just come in for a water break. Our pup, a Great Pyrenees has a tendency to get mouthy, and also sort of trample our 3 year old when he tries to herd her. Nothing dangerous, just annoying. So as I was trying to push him away from “protecting his flock,” I flicked my hand while telling him no. In doing so, my finger made direct contact with his canine and INSTANTLY hurt. I was pretty sure I’d managed to break my finger in that fluke moment. The pain was instantaneous and INTENSE. My body went into flight mode. My vision starting to tunnel as the sounds around me muffled. I knew I was about to pass out.

Quickly, probably slurring a bit, I told my oldest to call Dad and tell him I needed him home, now. I then said, “I think Mommy might pass out. I need you to grab an ice pack and shove it under my neck.” I made it to the couch and slid to a sitting position. I barely remember hearing her call her father, telling him Mom needed him home now, she was hurt and passing out. She got two ice packs and put one on my neck and I held the other to my face. I told her I needed to lay down and prop my feet up. I knew better than to stand, so I slid to the floor and laid across our Nugget couch as her brother quickly moved the triangle cushion under my feet. Moments later, I was much improved. The blackness had faded, the sounds no longer muffled, the rushes of adrenaline ebbing.

I called my husband and assured him I was fine now. And explained the whole scene. I had quite literally hit a nerve when my hand connected with our sweet pup’s tooth & my body said, “Peace out, homie!” He questioned me for about twenty minutes before he actually believed I was okay. The gravity of the situation was not lost on me. I was so impressed with how well my children had responded in crisis. But if I’m honest, all I could picture was that scene from Steel Magnolias where Shelby is comatose and her baby is just there, crying. 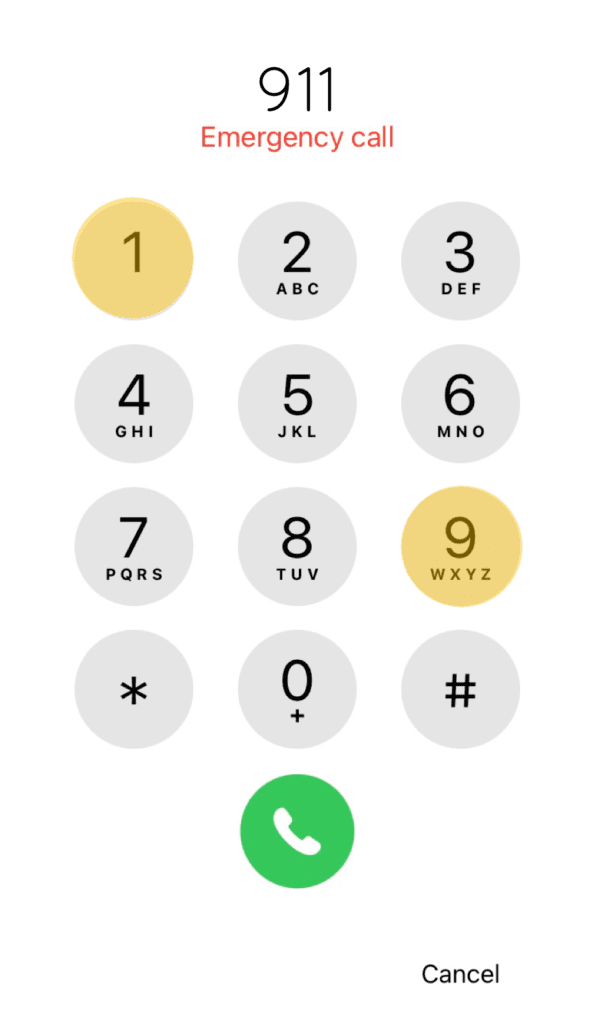 Later, once we’d all calmed down, I talked through the event with my kids. We talked through various scenarios of what could have happened. Especially that of if I had actually lost consciousness. My eight (almost nine) year old told me very plainly that she would have called 911. We’ve practiced emergency dialing on my phone in the past, memorization of our address, and even landmarks to tell 911 if she couldn’t remember our impossibly long street name. We have discussed emergencies, but more in line with fires or car accidents. I asked what they would have done if I had passed out & they needed to call Dad, to which my five year old promptly told me, “Alexa can call Dad! I just have to tell her to call Ice Adam Husband Mobile!” This was refreshing to hear, also something we’ve practiced with calling me (I just wasn’t aware he’d paid so much attention on how to call his Dad too).

As we continued to discuss, my eight year old asked, “What would 911 make me do?” So we talked about all the questions they may ask:

What’s your emergency?
What’s your address?
Is your mom awake?
Did she hit her head when she fell?
Do you have any pets? — This one sort of snuck up on me because this pup is new to our family and he’s much more protective, so I had to mention she would need to tell the dispatcher that we have a dog that does not let strangers in the house & she may have to kennel him or put him outside for the EMS.

Anyway, all this to say, we didn’t actually have to call 911 today, but there was potential. Take the time to prepare your children for emergencies. How to dial 911, even from a locked phone. Know their address or landmarks for your location. Important things they may need to tell dispatch. I never would have thought a finger injury would cause me to black out, but I am so glad to know my kids are prepared to jump into action! Learn from this and help prepare your family today.

Have you had the safety talk? What advice would you add?