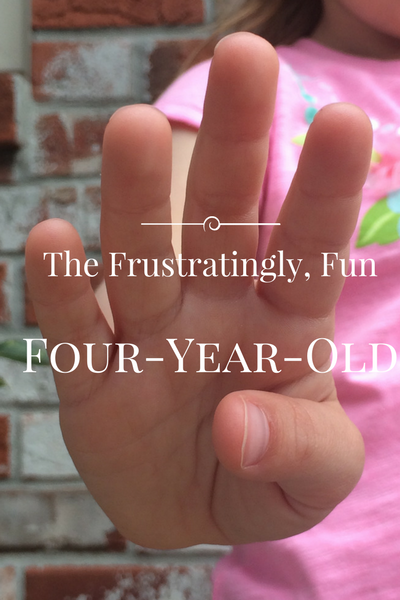 Ahhh, the four-year-old, an interesting creature of nature caught between the toddler years and becoming a big kid. The year of being four is, fun yet frustrating. Four-year-olds have the interesting ability to make your life blissfully happy as they no longer rely on you EVERY SINGLE MINUTE, and they can frustrate the heck out of you with their 7000 daily questions. Being four can be downright tough; you’re no longer doted on as you were as a baby and you still have to answer “No” when everyone asks “Are you in kindergarten yet?”

The independence of a four-year-old makes life easy breezy for us parents. You can pick up and go almost anywhere with confidence now that potty accidents are a distant memory. Most four-year-olds are tall enough to ride the fun rides at fairs and amusement parks. Their spirit of adventure and exploration gives them the desire to try new things even if they might be a little scary. Four-year-olds don’t need to be carried around any longer and are big enough to traverse beaches, pools and parks with at-a-distance supervision. Parents of four-year-olds kiss their little adventure-seekers every night before bed and secretly wish they wouldn’t grow anymore, but are wishfully optimistic about the days when five-point harness car seats are a thing of the past. With a four-year-old in our home, we’ve been able to (hesitantly) be more lenient with skipped naps and occasionally allow her to stay up WAY past her bedtime (Hello, New Year!) with minimal drama occurring past 9pm. Four-year-olds are really quite fun!

Four-year-olds can ask more rhetorical questions in one day than I ever thought imaginable. And after you think there couldn’t possibly be any more questions, there are more … always more. Four-year-old children have an amazingly increased sense of independence which is really great when you want them to occupy themselves for you to wash your hair, but on those days when they insist on dressing themselves from start to finish it is an entirely different story.

This year, like many four-year-olds, my daughter has really evolved in her role as big sister. Once upon a time, I had blissful thoughts about how well my children coexist as siblings … this year has changed that. There have been many days when my daughter has wanted nothing to do with her brother, well, because, she’s four and has been, at times, down right mean when it comes to sharing her toys or coexisting in the same general vicinity with our toddler. Meltdowns still occur regularly because life as a four-year-old can be downright frustrating.

By the time you all read this I’ll likely have wrapped up my year of parenting a four-year old and as I reflect on the year I marvel at the growth and confidence my daughter has achieved and I am eager to forget the meltdowns incurred over really important things like, princess band-aids. This year, as we bid farewell to our precious girl as she went off to “real” school, I was a bit teary-eyed watching her bravely move forward into her school aged years … one year closer to complete independence where she’ll need me to answer her curious questions no longer. And while this year has not been without frustrations, mostly it’s been fun and completely enjoyable watching my baby turn into an almost “big” kid! Tonight, I kissed my four-year-old goodnight and relished in the moment knowing soon she’ll be five.