Meal planning. The term itself seems to conjure up dread.

I’m the kind of person that loves lists, loves plans. I also know from experience that if I meal plan, I save a lot more money than if I don’t take the time to make a plan for meals before I go grocery shopping.

When it comes to meal planning, I have tried it all. 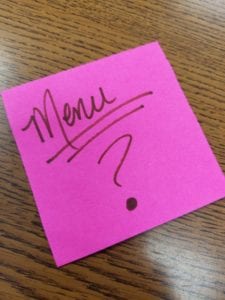 I’ve tried doing themed-meal nights to make things easy – Taco Tuesday, Sheet Pan Dinner Thursday, Fish Friday, etc. I somewhat stick to this when I sit down to make a grocery list, but for the most part, this has gone to the wayside.

I’ve even tried planning meals a month out in advance. (What’s hilarious about this one is that I did it after my second baby — who does this kind of madness?)

I’ve made a huge list of “Meals We Like to Eat” and keep it in my planner to make meal-planning easier. I look at this list, but then get on Pinterest to figure out what we actually are going to eat. So it looks good, and seems like a nice idea, but it isn’t reality.

I’ve made huge batches of freezer meals, which worked for while, but I stopped doing that, too, for absolutely no good reason.

When it comes right down to it … I’m just a meal planning failure.

All of these things that I’ve tried, I have not stuck to long-term. Currently, my meal planning looks like this: make a menu for a full-week, make a grocery pick-up run based on the menu. So far, so good, right? And it would be, if I would sit down and make the menu again week after week. But instead of doing that like a responsible adult, at the end of the menu week, the plan changes to eat grilled cheese or pick up pizza, or make peanut-butter and jelly sandwiches, or eat the always-present eggs and toast again for dinner because sitting down and making a menu seems like the worst thing in the world at that moment.

I have no idea why I am this way. I have great plans for the next week every single week, but when that day arrives, something seems to hijack my plans. A long day at work or crying children or a bad headache … and it just seems easier to push it off until tomorrow.

I know some people manage to not only meal plan but also meal prep on the weekends. I can’t even imagine having this level of preparedness to have everything cooked for the week. They are clearly winning at life in a way that I’m not even going to attempt.

As of now, we’ve eaten basically everything in the fridge, and I couldn’t put it off any longer. I made my menu and will pick up the groceries later today. When next Tuesday comes around, we’ll be back to eating grilled cheese or eggs and toast.

Because as much as I want it to be a blazing success and save tons of money and time, I already know, I’m a meal planning disaster.