For my older two kids’ birthdays this year, we celebrated with them on their birthdays in January and February, but decided to forgo the parties in favor of taking them on a special trip. We had planned to take a trip in March or April to the beach.

Like thousands of others, those plans were cancelled thanks to Covid-19. Shortly after Disney shuttered its doors, my Facebook feed was filled with disappointed posts from friends who had planned trips around spring break who would no longer be going. Beach trips for many were outright cancelled, not just delayed for later in the year.

My children have adjusted to quarantine life pretty well as the weeks have passed and are using their imaginations for all sorts of things. So it didn’t surprise me at all when my oldest turned to me one day asking about our cancelled trip and said, “Mama, since we can’t go to the beach, why don’t we make our house more like the beach?”

But how would we do that?

When she initially gave me her idea, I had no idea how on earth we would go about accomplishing such a task. So I asked her. Luckily for me, her little five year old brain had the entire thing already worked out.

“So, we will fill up our pool and pretend it’s the ocean. The grass can be the sand. And we can have our lunch picnic outside on the sand.” 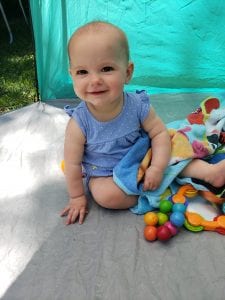 The next thing to decide was when we were going to have our pretend beach day. We chose the upcoming Saturday, and they built up the excitement by themselves all week long.

On the morning of the anticipated beach day, everybody donned swimsuits and headed to the backyard. I made a production of applying sunscreen to everyone and told them to “stay out of the ocean until your sunscreen is dry.” We filled up the pool and set up our beach tent in the “sand.”

I immediately noticed a ton of advantages to our faux beach day. First of all (and you can disagree with me if you want but this is how I feel about it), going to the actual beach with little kids is not relaxing in any way, shape, or form. They think they want to play in the sand, but two seconds in, they’re crying because the sand is hot. And they want a snack. And you’ve had to haul a ton of stuff from the car to your spot on the beach, and as soon as you get it there, the kids are ready to go back to the hotel. 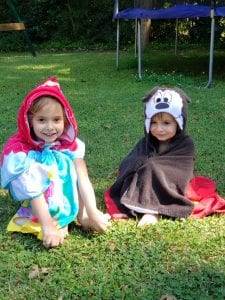 But at home. At OUR “beach”…there was no sand. There was no dealing with hauling anything anywhere. I was able to set up the pack and play for the baby. Snacks were easy. I was relaxed…probably the most relaxed I’ve been during quarantine. In my mind, this was easily one of the best ideas Lillian has ever had.

After we had our picnic lunch, we went “back to the hotel” to take naps in the “hotel room” (i.e. – mom and dad’s bed!) and watch a movie before heading back out to the beach.

Making the best of it

The entire day was perfect. We ended the day with cereal and milk for dinner because that seems like the sort of thing we might have eaten back at the hotel after a long day playing at the beach.

I don’t know what my kids will actually remember about quarantine. But I hope they remember our “beach day.” I hope memories were made.

If you were one of the many who had cancelled plans, I encourage you to take your kid’s lead and pretend play with them for a vacation day. You’d be surprised at what they will come up with and chances are, even though you’re still at home, you’ll be able to relax a little too.