I knew it would happen one day. My loving and kind little girls who ordinarily treat me like I hung the moon would look me in the eye and tell me something awful about myself. I just didn’t think it would happen so soon.

I was going through the usual morning wardrobe negotiations, when one of my girls looked at me and said, “Mama, you’re fat.” My husband jumped in to protect my honor, while I stared in shock. I can usually laugh off the typical childish insults like “Mom, you’re stupid” or “I hate you, Mom,” because I know I’m not stupid and I know they love me. But this one cut to the bone, because it’s something I actually feel about myself.

There’s not a mom out there who will say that they like the way they look all the time. In my single, childless days, I worked hard to stay fit and eat healthy and assumed that I would do the same throughout motherhood. The problem with that assumption is that motherhood is so much messier than I ever could have imagined, and my priorities shift away from myself daily.

I realized that I hadn’t been called fat to my face since I was a kid. At least then, I could dislike that person and not be around them, but this was my daughter. I didn’t have that option, because I could never dislike her or walk away from her. My first instinct was to punish her for making me hurt so badly. I wanted to say something like, “Okay, if I’m so fat, then you can go ahead and put your shoes on by yourself.” But I couldn’t, because I’m her mother. I have to help her with her shoes and get her to school. I’m not allowed to have reactionary meltdowns.

I took a deep breath and asked her why she said it. She said she didn’t know, but I already knew the answer. She had heard that word used as an insult and wanted to try it out. It had nothing to do with me personally, except that she was mad that I was making her go to school. The last thing I wanted to do was talk about it, but the thought of her saying this to another person forced me to address it. I gave her the usual spiel about how everyone looks different and that the word “fat” tends to be associated with something negative. 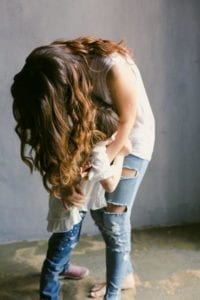 She could tell that she hurt my feelings and was quiet as she made her way out the door with her sisters. I finished getting ready for work in a daze. This side of motherhood is really tough. It’s a constantly swinging pendulum of love and pain. One minute your kids are obsessed with you and worshiping your every move, and the next minute they want nothing to do with you or lash out at you with insults. It’s such an awful feeling, because that little person means everything to you. Then, you have to suck it up and turn the whole thing into a “teaching moment” so they won’t treat anyone else like that.

When I picked her up from school that afternoon, the first thing she told me in the car was that she was sorry for calling me fat. It wasn’t the apology that made me feel better, it was the fact that our talk stuck with her all day. That’s a long time for a three year-old attention span. I was glad that I tackled it head on instead of retreating into the “my feelings are hurt” bubble that I’m prone to hiding in. I know this is only the beginning. I have three daughters. They will definitely lash out at me more and more as the years go on, and I’ll have to keep reminding myself that it’s nothing personal. I’m just their mom.