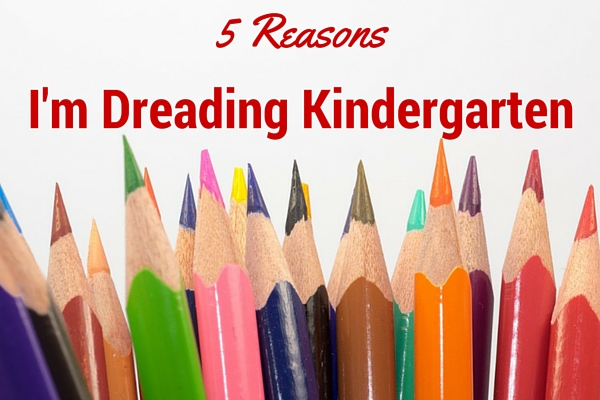 My oldest child is starting Kindergarten this month. I know that for many, this particular season of life is viewed with fondness, as a child transitions out of toddlerhood. Some moms even jump for joy at the opportunity to send their kids off to school for the day. But I’ve got to be honest with you – I’m not one of them. In fact, I’m dreading Kindergarten, and not just because it means my baby is growing up. Nope, I’ve got downright, selfish reasons why I’m looking at this new chapter of our life with disdain.

1. I’m going to have to start waking up a lot earlier.

I am NOT a morning person. If it were up to me, I’d sleep in every day until 9:00am. As it stands, I typically roll out of bed sometime between 8:15am and 8:30am (thankfully, my husband keeps an eye on our boys in the early morning while he’s getting ready for work). But once Kindergarten starts, I’m going to have to operate on the school’s schedule. And school starts at 8:30am, which means I need to get a child dressed, brushed, fed and delivered to said school sooner than I wake up now. This is so unfair.

2. I’m going to have to enforce school uniforms.


I’m one of those hippie moms who likes to let my child express himself. And my child loves to do just that through his wardrobe choices. He especially likes to wear his clothes backwards. To me, it’s no big deal. It’s just Noah experimenting and coming into his own. Unfortunately, The Man over at the school district has decided that such forms of expression will not be tolerated. School uniforms are mandatory in Southern Louisiana, which means that every morning I’m going to have to fight to get my son to wear and tuck in his collared shirt. Lucky me!

3. I’m going to have to start looking presentable.

I’m a self-described hot mess mom. I’ll admit it, some days while dropping my son off to preschool, I’d roll up wearing the same clothes I had slept in the night before (this blog is a judgment free zone, right?). But things seem different in Kindergarten. I don’t know if it’s because there will be more people around or if it’s because I’ll be surrounded by the same group of people for years to come. But whatever the case, I’m already feeling the pressure to actually put on an outfit, do my hair, and maybe even throw on a little bit of makeup. Which means I’m going to have to start waking up even earlier than I originally thought. Great.

4. I’m going to get pressured into volunteering.

Some people love kids. Me … not so much. Don’t get me wrong, I love MY kids to pieces, but I’m not fond of large groups of small children. They just, well, kind of terrify me. To me, being a Kindergarten teacher would be a nightmare of a job. But I already know I’m going to get guilted into volunteering at my son’s school. Maybe I’ll be there to help out in the classroom or maybe I’ll be chaperoning a field trip. But all I know is that I’m going to be surrounded by a group of 5-year-olds who are ready to eat me alive.

5. My life is going to revolve around someone else’s schedule.

So far, this mom thing, while not at all easy, has been done on my own terms. Sure, there was preschool drop-off and pick-up that I had to abide by. But other than that, I’ve called all the shots. Not anymore. Now I’m going to have to be at home, waiting outside for my son to get off the bus at 4:00pm everyday. Then I’m going to have to spend the next 30 minutes to an hour helping him with his homework. And if he’s got a special project to do, all bets are off. Nope, my life from this point forward is going to revolve around my child’s schedule, and there’s not a thing I can do about it.

I know that once Kindergarten starts, I’ll see the benefits of it. I’ll see my little man growing and learning, and in the end it’ll all be worth it. But for now, I’m just going to have my own little pity party as I grieve the freedoms I’m about to give up.

Do you have a child entering school for the first time? How are you feeling about it?