Sleeping through the night…Ahh, the holy grail of those first few months with your baby: he’s adorable, she’s the love of your life, you can’t remember life before her, and WHEN WILL HE STOP WAKING YOU UP AT 3 A.M.? 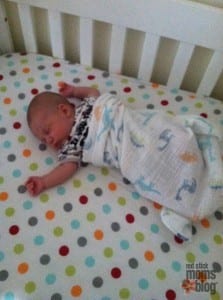 When we brought William home, he was a very small baby who desperately needed to gain weight. I was so concerned about him that I was happy to feed him every two hours. I’m pretty sure that pure adrenaline kept me going during those first few weeks. I rarely slept more than about 2 hours at a time. I am breastfeeding and felt like I didn’t have time to pump and let my husband take a turn. Also, for some reason, the breast pump intimidated me. So I fed my son around the clock and his weight shot up. I was thrilled with the results of our constant feeding, and honestly I wasn’t really that tired at first. I was running on a new-mommy high.

As time went on, though, I started to grow weary from lack of sleep. I know this is not a unique situation – almost every parent goes through this. I know there are those rare babies who sleep through the night from the start, but most spend at least the first few weeks waking up several times per night. The babies have to eat that often in order to stay healthy and grow.

By William’s eight week doctor’s appointment, he was above the 50th percentile in weight and our pediatrician said there was no reason he couldn’t go for longer stretches without eating. By now he had stretched his feedings to every three hours, so I was getting a little more sleep. But as someone who, prior to parenthood, needed 8 to 9 hours per night just to feel like a sane person, it was wearing on me. The doctor encouraged me to occasionally try to settle him down, but not feed him, when he woke up, to see if he was truly hungry or just waking up and wanting attention. This is something I never really did. I decided that if I tried to feed him and he ate, I would keep feeding him. But this couldn’t last forever.

Sure enough, by about 10 weeks he was only waking up about twice per night. This felt amazing. I could get four or five hours of sleep at a time. Then came the night when he only woke up once. I was so happy. “I can do this forever!” I told my husband, thinking that this was probably as good as I could hope for and waking up only once a night felt like a day at the spa. This went on for a while, and I realized that he would eventually sleep through the night. I just had to be patient.

At 16 weeks he slept through the night two nights in a row. My husband and I rejoiced! We can sleep like real people again! Woohoo!

Guess how long that lasted? Yep. Two nights. But he still was only getting up once or twice, so I was ok with that. And then this past week, a tired mother’s fear descended upon our house: sleep regression.

All of a sudden, William was up every three hours again. It was like the weeks of progress never happened. I was exhausted – it’s amazing how quickly you become unaccustomed to sleep deprivation. Sometimes he wouldn’t even make it three hours. I turned to the Internet and learned that there is something called a “four-month sleep regression.”

Put simply, newborns do not have distinctive sleep cycles. They still go between active (“REM”) sleep and quiet (“non-REM”) sleep, but they spend much more of their time in deep sleep than adults do. This is why newborns seem to sleep all the time, and often have to be woken up to eat. But at three or four months, babies start sleeping like everyone else. They are in deep sleep for less of the time, and they wake up between cycles because their bodies are not used to it. This is why just when you start to enjoy five- or six-hour stretches of sleep, your baby starts waking every 2-3 hours again.

So what to do? 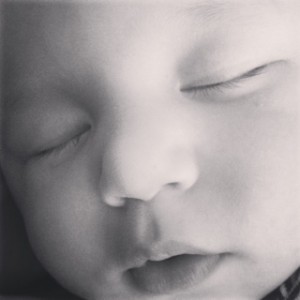 Before I found out that this is a common occurrence among four-month-olds, I thought that maybe William wasn’t sleeping because he was hungry. We have started him on rice cereal and he is enjoying it, and we are looking forward to introducing other foods slowly as I continue to breastfeed him. But it hasn’t made much of a difference in his sleep. Most tips I’ve found online include letting the babies cry it out (using the Ferber Method), but I’ve never been very good at that. One thing that I have found helpful is what many call a “dream feed.” Usually William goes down around eight o’clock in the evening and before I go to bed around 11 or so, I carefully lift him out of his crib and feed him. Usually he doesn’t even really wake up. When he’s finished, I place him back in the crib and he continues sleeping.

The dream feed helped a bit, but mostly we just had to wait it out. Fortunately, within about a week, he was back to waking up twice a night. Now, he’s back to once a night. We still haven’t gotten to sleep all night, but I’ll take it. The sleep deprivation that comes with new parenting is something that everyone talks about, but no one really understands until they experience it. Hang in there, new parents! I can’t wait to post someday soon that William is consistently sleeping through the night.  Until then if you’re up at two or three in the morning, think of me, because I’m probably up too! One thing that I think all parents will agree on is that despite the long nights and lack of sleep, it is so completely worth it.

What tips and tricks do you use to get your little ones sleeping through the night?