Oh, and THAT wasn’t the end of it. Kid 1 tested the boundaries of aggravating physical contact with Kid 2, refused to act after a threat of punishment and was forcibly removed from the room (by mom), winding up outside on a bench. These were not my children and that was not me – not this time. I was at an activity for my daughter, waiting with some other parents when one poor mama was tested by one of the best. None of us knew each other. I pretended to stare at my phone. None of us could help her in that moment. We all waited – and thought two things: 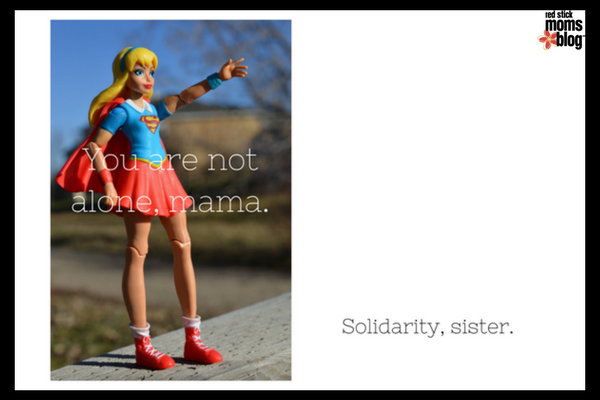 I have a Kid 1. She’s brilliant and beautiful and … challenging when she decides to be. When she makes up her mind, there is precious little that can move her. I have been that mother. In public, being tested and tried to the end of my wit and patience, trying to merely keep it together without giving too much on my side of the line in this tug-of-war. In those moments, I ALWAYS feel alone. I usually leave the scene feeling defeated by the situation AND the child. I can beat myself up pretty good over those kinds of instances, feeling those glances, wearing my shame – even if I did everything “right.”

It wasn’t so that day – I’m proud to say that we acted. Once the mom came back into the waiting area, errant child deposited on a bench outside – she was greeted with smiles and nods. I had worked up my gumption to give her unsolicited encouragement but before I could speak, one mother reached out to her saying, “We’ve ALL been there.” I couldn’t believe I wasn’t the first to address her. I said, “You’re NOT alone,” putting my phone away as an invitation to conversation. She sat close to me and we started to chat. She kept her cool but was embarrassed. When we started to share stories, another mom came over, introduced herself and said, “I have to be a part of this conversation – (looks at other mother) – you’re DEFINITELY not alone.” We all chatted for about 15 minutes, sharing stories and trading tactics. It was community.

True story. It was great. I left feeling less alone. I’d garner a bet the other women did, too. I know only their names and we most likely won’t get to engage like that again unless the stars align, but I’ll always remember our conversation. And MAYBE when that happens to me (because it totally will), I’ll know that those folks around me get it (some of them, anyway).