It was a typical Sunday afternoon. The sun was shining, the TV was blasting Disney tunes, the house smelled of Pine Sol as I cleaned the house, and my boys were playing contently in their rooms. Or so I thought. 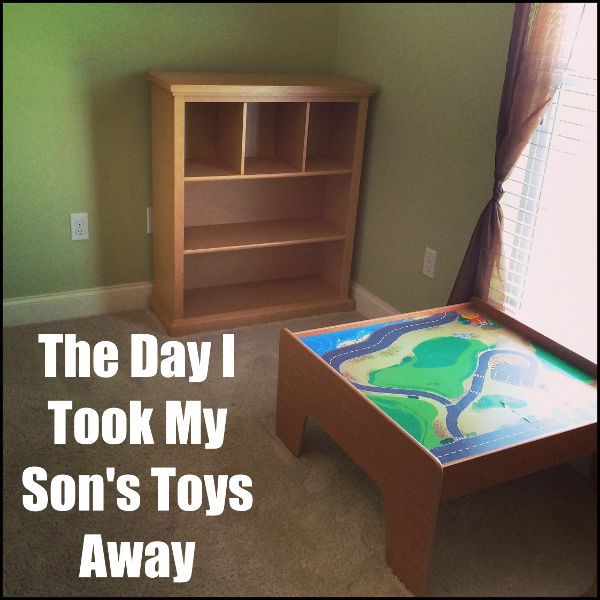 I walked into my 3 year old’s room to instruct him to pick up his toys so I could vacuum his room. Upon entering, I could see his stout little body standing amidst his toys (the millions of toys) doing something inexplicably horrible. I won’t go into detail, but it involved a bodily function. On his toys.  And on the carpet. And wherever else it may have sprayed in his startled state of mind when I shrieked. I asked him why he would do such a thing (keep in mind this 3 year old of mine has been potty trained for well over a year now), and his reasoning was not nearly good enough. His explanation set me off. It sent my emotions into a frenzy, and I did the unthinkable. I did what 98.5% of moms threaten at least twice during their children’s lives…I took all of his toys away. ALL. OF. THEM. Every last, little, tiny Lego and train track piece. 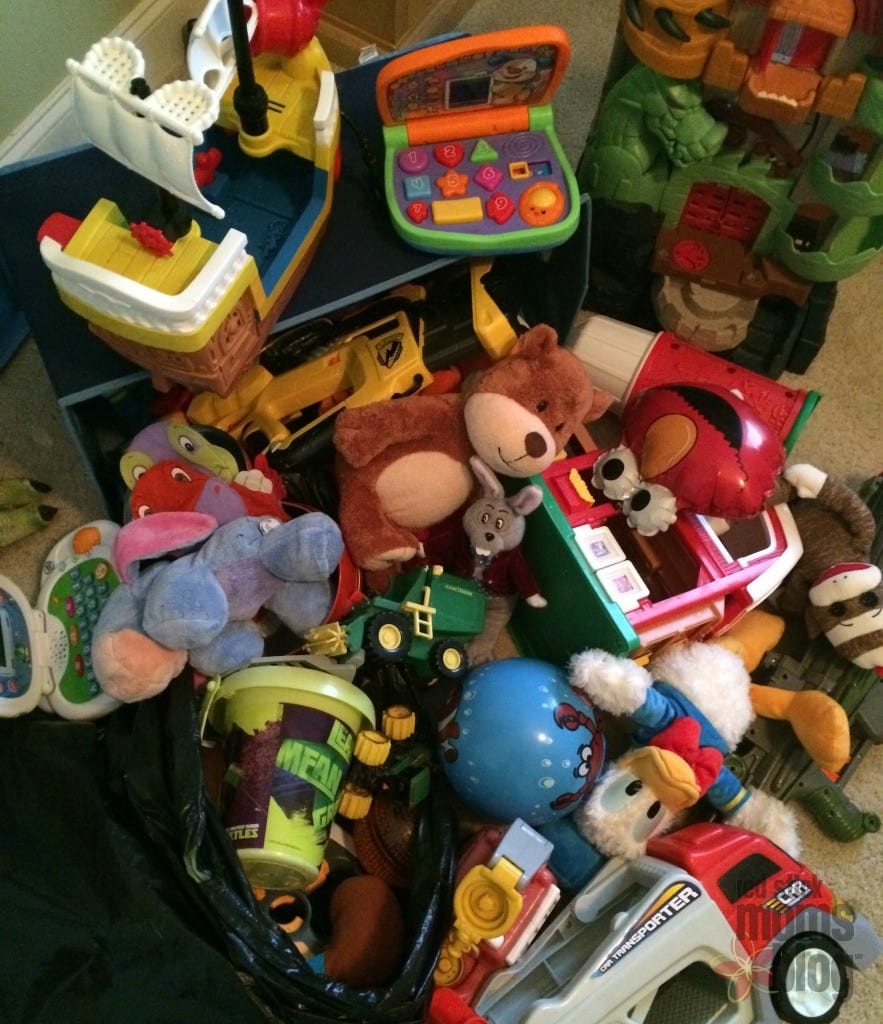 Two whole black Hefty garbage bags contained all of his toys within 10 minutes of the incident. The black bags quickly made their way out of said 3 year old’s view and a stern momma talk followed. Lecturing toddlers is like nothing else in this world. It is like having a serious conversation with a puppy. In their mind everything is all happy and theirs and Disney Jr and theirs and chicken nuggets and did I mention everything is theirs…. Get my point? He understood why his toys were taken away when I asked. He understood what he did was wrong. I had threatened numerous times to take away his toys before when he mistreated them, was ungrateful, or even when he wouldn’t clean his room when I demanded. But my momma guilt, like always, let him win. Not this time buddy. Oh no, I was DONE! He was going to know who was boss. He was going to know what it was like to go a whole week (which in toddler time is like a year) without any toys. NONE, NADA, ZERO!!! And I was going to sit back and enjoy watching him mope around without anything to play with being bored to tears. Well, he showed me.

Within an hour, I could hear him in his room singing a sweet little song while twirling under his ceiling fan. Later I found him playing with a paper towel roll he got out of the garbage can (albeit nasty). The next morning, I awoke to him using the shoes by the backdoor as boats with rolled socks as its passengers. A few days later I videoed him counting rocks in the driveway. My plan wasn’t going as planned. I just knew that he was going to be grief stricken by not having any of his toys. But what I quickly realized is that toys are meaningless. They are nothing. They are not needed to have a good time or to even PLAY. Why have I spent countless hours searching for the perfect toys for him and his brothers for Christmas and birthdays? Why have I put so much value into these toys that are ubiquitous in my house? It looks like that nasty, horrible, no good incident taught ME a lesson instead of my three year old. Toys are not needed to make a happy child. They are not needed to help encourage their imaginations or even help them learn. Toys are something that make ME as a parent feel complete. When I hand over a brand new toy to my child and I see that instant smile it makes ME happy. Sure, the kid will love that toy for a few days, maybe a few months, but it will get old.  They always do, which in turn leaves them hungry for more and more and more…  And the cycle continues. 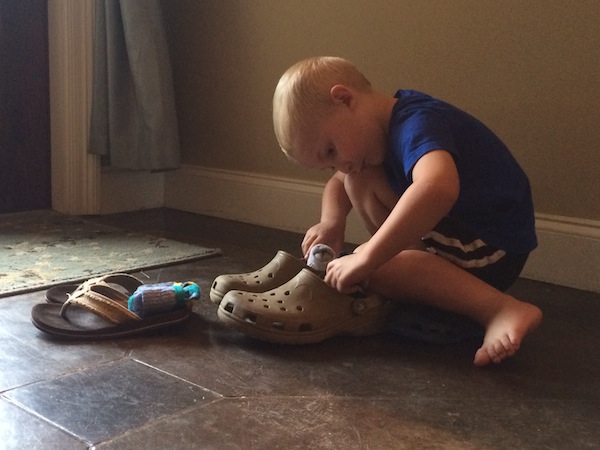 To this day, almost two weeks after the incident, my son has yet to receive his toys back. Not because he is still punished, but simply because he hasn’t asked for them. Okay, wait, he did ask for his LSU helmet last Saturday night, to which I happily obliged, but that is all. He has forgotten the death grip hold his sacred toys once had on him and now he finds happiness in simple, everyday things like bubble wrap that comes with his brother’s monthly shipment of Pediasure. But who can blame him, who doesn’t love bubble wrap?!?!

What lessons have your children taught you?