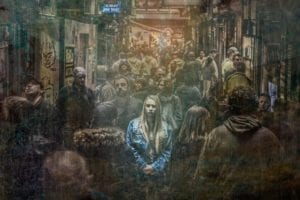 In Troubled Families, abuse & Neglect are permitted; it’s the talking about them that is forbidden.

A scapegoat in a family is oftentimes the target of accusations, ostracism, and aggression. They will eventually believe the fault lies with them as they try to “toe the family line” but never measure up.  They typically grow up to be depressed, anxious, internalizers of all blame whether or not its true, or suicidal. They have low self-esteem and are highly sensitive, but they’re also justice-seeking and empathic. They know they’re different because they’ve never known another way and no matter how much they’ve tried to plead their innocence to their family members or to themselves, it is never validated. They have to learn to accept the apologies they have never received and probably never will. They have to keep going and oftentimes don’t really know how so they sabotage their own success as adults, preferring to fly under the radar and keep from being a target. They mistrust anything good and they have to work REALLY HARD at love and relationships because what they’ve experienced is ABUSE in every sense of the word but they’ve been conditioned to think it’s love.

I was today-years-old whenever I discovered that this was my truth. My hope is that by sharing it I can help at least one person who’s lived the same truth feel less alone. I am learning to flip the script for myself that I was given and I know you can do the same.

Just A Few Days Ago

“WHY DON’T YOU JUST GO BLOG ABOUT IT SINCE YOU’RE SO GOOD WITH STORIES?”

-using my love of reading and writing as a weapon against me and my credibility for the final time.

I have learned by now that I do not owe anyone for my existence. The scars may not be visible, but the damage is done. I can be grateful for everything good that was given to me, sure, but I do not have to love the scars that came along with them. I can forgive the ones who held the dagger but I DO NOT have to keep myself vulnerable to another attack. Though considered sacrilege, I stand up for myself in kindness and I refuse to accept that my gifts of reading and writing are evil. They were the sacred things that safeguarded my heart and sanity as I struggled to come to terms with my surroundings and reality.

Blogging about my beloved children in a community of courageous women who aren’t afraid to be vulnerable is just another blessing in my life that I truly enjoy as I strive to reprogram my inner dialogue from “Unlovable Child” to “Good Enough Mommy”, from “Scapegoat” of my past family to “the GOAT” to my children, who will never have to earn my love.