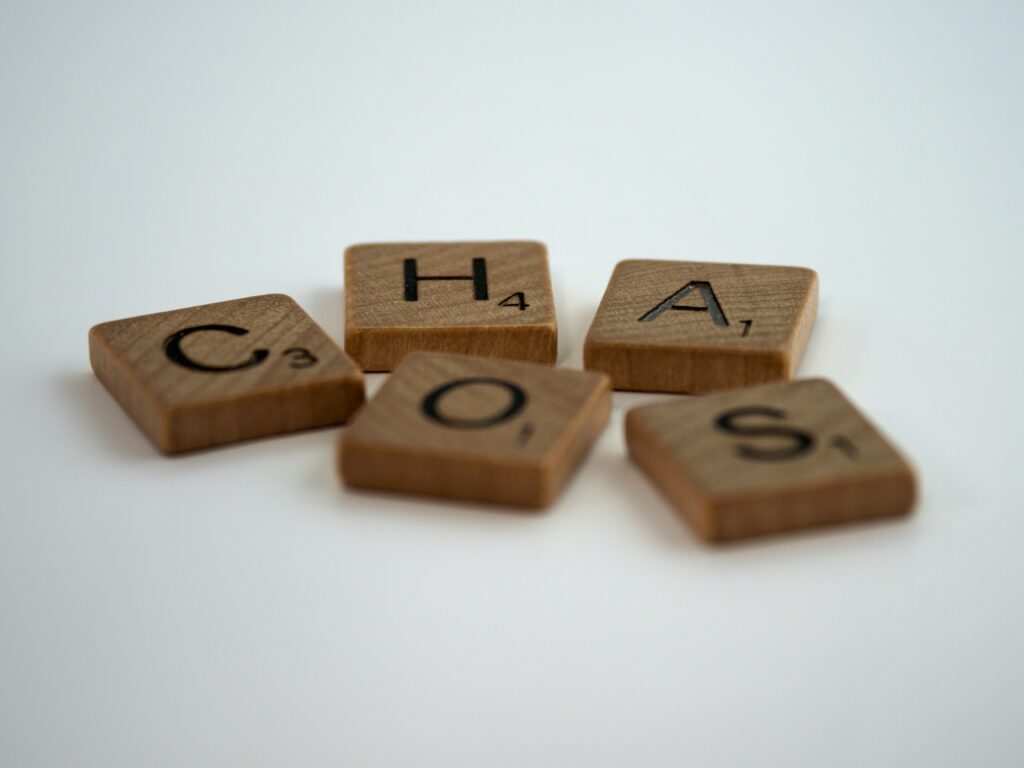 There is laundry everywhere.

An untidy jumble of folded and unfolded clothing that has sat on our dining room table for over a week, individuals snatching what they need, never bothering to put it away. But I can’t say anything.

I haven’t bothered either.

Because dust has settled on every surface even though I could have sworn I just dusted. And the kitchen island is forever in flux between clean and crumbs. And we spent an entire weekend weeding, putting the overgrown flower beds back to some semblance of order, only for the heat and rain to force the ever creeping chaos of new weedlings free of the soil.

And my children have run out of clean uniforms and underwear again, because of course the laundry that has been done is never the right kind.

The beds need to be made.

I am fighting a never ending battle to bring order to the chaos and I am losing.

We are all losing.

Because, with all of our careful planning and cleaning and organizing, we are attempting to fight against the very nature of the universe itself.

The Second Law of Thermodynamics, in it’s most simple form, tells us so…that the disorder and randomness of the system, the entropy, always increases.

Every day we fight a losing game.

But, this isn’t a post about giving up. Or the one magical trick (besides hiring a housekeeper) that will fix all of your chore woes. This, more than anything, is a gentle reminder that it’s not just you. You’re not alone. Every single person on this planet battles against the inevitability of entropy. And though the effort sometimes feels futile, it’s worth it.

Isn’t that motherhood in a nutshell?

Our bodies take a chaotic jumble of cells and give them order, give them life, only to birth them into disorder, no matter how perfectly planned.

And then this tiny, sublimely organized person—with their intricate biological architecture where each cell and system has a perfectly organized purpose—becomes a tiny ball of bedlam. Their tiny bodies a constant tumult of movement and emotions, desperately trying to cope and understand and just be.

And we follow behind, feeding, bathing, changing, doing our best to keep chaos at bay (and prevent them from willfully injuring themselves multiple times every day.) And sometimes we fail. We can’t prevent every bump and bruise. But, that’s okay.

And, if we are doing our jobs well, we nurture and protect for the sole purpose of one day setting them on their own paths.

Because we are mothers.

And that is our job. But it’s so much more than that. It is our power.

And we have forgotten that.

In the everyday drudgery of work and school and cleaning and the never ending cycle that we are and forever will be caught in, we have forgotten that it isn’t drudgery.

The ancient Egyptians believed that the great creator god Re traveled across the sky and every night he fought the great serpent of chaos. They believed, every night, there was a battle between Order and Chaos for our very existence. And every morning the sun rose, it meant that chaos had been beaten back for another day. The battle never stopped. It can’t stop. Because if it did, chaos and disorder wouldn’t just win, they would destroy everything.

So I try to remember, when the house is a mess and my brain is an untidy swirl of past and present, everything I should and shouldn’t be doing. When my failure in executive function makes even everyday tasks difficult and overwhelming…entropy may be inevitable.

But giving in is not.

Because I am a mother.

And I am powerful, we are powerful, whether it’s in big or small ways.

The universe might be chaos, but we are the warriors who keep it in check..one load of laundry at a time.