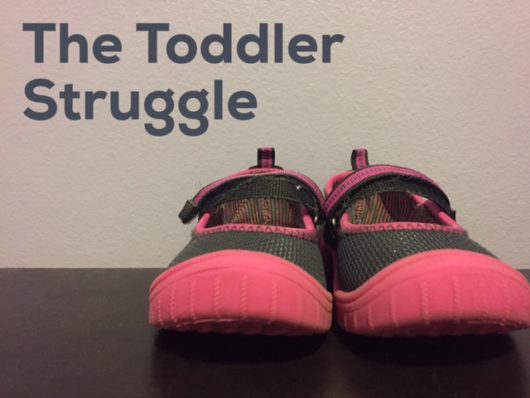 You know the sound – the sound of frustrated whining mixed with an over-dramatic, “I can’t dooo it!” It’s a real struggle to be a toddler. Almost every experience is a challenge to overcome. Anything from feeding themselves to building towers to coloring. This particular time, it was the shoes.

We got home from a friend’s gymnastics birthday party a few weekends ago where my daughter Salem was required to take off her shoes. They were the slip on Mary Jane style with a velcro strap. And thanks to all the running and jumping around, it was time for a good nap. As she stood in her doorway just a little wobbly, she figured out how to slip her feet out of the shoes one at a time. I realize many “nearly” three-year-olds can already do this, but sometimes she has to figure out how to do things differently due to wearing a torso cast that is correcting her scoliosis. I was so proud.

The next time she wanted to put those same shoes back on, she attempted it herself without asking me. I heard the struggling noises as she got one foot in, but the back of the shoe was bent down below her heel. Then I heard the defeat in her voice as she whined, “I can’t do it.” I calmly told her to just try again. She wiggled her foot and figured out how to pull the back out. I held out my hand for her to balance with the second foot and she loosely strapped down the velcro.

Watching my kid struggle is hard. And I consider myself still fairly new at this. Sometimes I want to rush in and just do whatever it is she needs help with. Partially because I hate when she gets frustrated and because it would just be quicker and easier for me to do it. However, neither of those are good reasons, nor would they benefit her (I am constantly reminding myself of this also.). I want her to learn how to do things her own way, not just my way or that things will always be done for her. I want her to learn that she can keep trying even though she feels like giving up. I want her to know the sense of accomplishment from conquering something.

Kids need space to struggle. I think they not only refine tasks but learn valuable lessons in the process. And I don’t want to take that opportunity from her. So I’ll continue to do my best to encourage her independence, cheer her on and guide her gently through any struggles she faces along the way. If only they could all be as simple as putting on shoes.