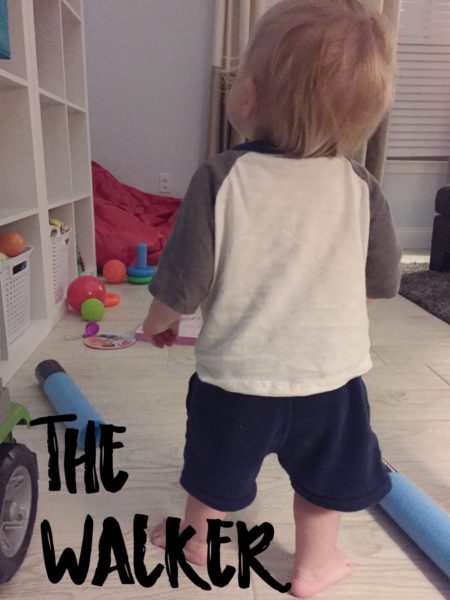 The pitter-patter of little feet – the phrase everyone uses when talking about having babies. While it refers to a major milestone, it’s not one that happens for quite some time. So many others take place first: first smile, foods, word, etc. So many other things to soak in as brand new parents. Then it hits you.
A little over a year ago, my sweet baby boy was born. My second baby. And yes, things have gone by so much quicker this time around. Our attention is shared and so are his moments. They blend in like additions to a painting instead of being the main focus. He was just born; now he’s laughing, waving … and walking. Walking.
I’ve always noticed his intense personality. Or maybe it’s just a boy thing. Regardless, he’s intense whether he’s upset or happy. So of course there were no “Oh I think I’ll take a couple of wobbly steps” moments. He full on walked and has been for a couple of weeks now.
They said it would be worse when it happened. “They” being any other parent in close proximity offering their advice based on their experience. That and because I have a toddler too, I guess. There have been a few times where I can understand that argument. He gets places faster, causing me to hurry if he’s headed towards stairs or something else potentially dangerous. He figured out he can reach more things, blinds and curtains recently. And he falls more. He’s a walker but not to the point where he has a Fitbit yet or anything; he still trips over things from time to time. So every now and then he gets a bruise or bloody lip.
I always said it would be better. And I think so far it is. He is definitely a mama’s boy so he was attached to my hip for a while there. I feel like I can parent two kids better and more equally without something, or someone, attached to me all the time. He’s down on the ground now, gaining independence and exploring by himself. I can hold his hand while he walks or let go of his hand if I need to. Sometimes he wants me to. He can keep up easier with his sister, which makes for better games of tag (he doesn’t know what tag is yet but she’s already been playing with him). Also, he’s less likely to pick up random things on the floor and put them in his mouth.
He went from birth to walking in a moment. My baby has learned a skill that, to me, no longer categorizes him as a baby. I do miss the baby but am enjoying seeing him grow into the person he will become. In just a few more moments it seems, he’ll be walking into kindergarten next!
“Congratulations!
Today is your day.
You’re off to Great Places!
You’re off and away!”
-Oh the Places You’ll Go