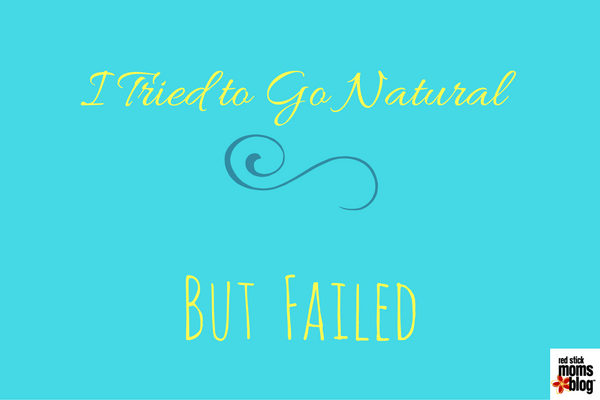 Even before I was pregnant with my first child, I knew I wanted a natural birth. I watched The Business of Being Born and I was hooked. I wanted to experience all the sensations of labor and childbirth, and I was willing to forgo any and all pain relief.

So when I finally did become pregnant, I did what any natural birth pregnant mama would do. I read Ina May’s Guide to Childbirth and was inspired by all the birth stories. I took a totally hippie natural childbirth class (we lived in San Francisco at the time, so when I say it was “hippie” I mean it was h-i-p-p-i-e!). I told everybody that I was going natural. I meditated. I did yoga. I hired a doula. I was 100% all in.

And then, on the evening of my due date, as I was laying on the couch with my husband watching Star Trek, my labor started with my water breaking. “The baby’s coming!” I thought excitedly. I was certain I would be holding my sweet newborn within a few hours. The contractions began shortly after my water broke, and they excited me because they reminded me just how close I was to seeing this thing through.

Throughout the night and into the next morning, the contractions kept coming, and coming, and getting more and more intense. I labored in the shower. I went for walks around my neighborhood. But while the contractions kept coming, they weren’t getting any closer together. They were irregular, and there was no real pattern to them. “This isn’t how it’s supposed to be,” I thought. Before I knew it, I had been in labor for nearly a day, full of intense and painful contractions, but I didn’t feel like I was anywhere near seeing my baby.

The hospital I was giving birth at had a rule that if your labor started with your water breaking, you had to either have the baby within 24 hours or come to the hospital at the 24-hour mark to receive Pitocin due to the risk of infection. I wasn’t happy that I would need to be induced, but I had known this rule going into the birth, and I was ready to accept my fate. But then, as I was in my hospital room waiting to get hooked up to the Pit, a road block was thrown at me. 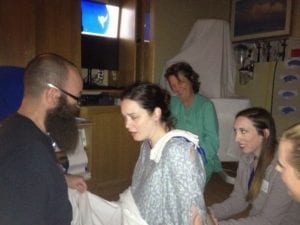 “You’ve been up for more than 24 hours,” the midwife said. “You really need to sleep. We’re going to give you a shot for morphine-induced sleep.” “MORPHINE?!” I thought. I was willing to accept Pitocin, but Morphine seemed a bit extreme. But the truth was, I was exhausted. And I knew I still had hours of labor ahead of me. So after my husband and I weighed the pros and cons, we decided to accept the Morphine.

And so I slept for a few hours, and when I woke up they hooked me up to the Pitocin. And then things got REAL. My contractions went from painful, yet irregular, to being right on top of each other and unbearable. It felt like I was constantly in the middle of a never-ending, painful contraction. “I can’t do this laying down,” I said. So I changed positions. They even taped up a plastic bag to my arm with the IV and I got in the shower. But even still, the water offered no relief. My anxiety was rising, and the pain from the Pitocin-induced contractions was so bad I thought I was going to die. And I was still only about 5 cm dilated.

I didn’t want to get an epidural, but I knew I needed some form of chemical relief. So I asked for Fentanyl, or as I call it, “sweet, sweet Fentanyl.” And it worked! Oh, boy did it work. I calmed down and I relaxed a little. The contractions became bearable. And before I knew it, after 31.5 hours of labor, my little boy was born.

But the thing was, even though I was excited by the birth of my child, all I could think about was how much I felt like a failure. I had spent more than a year preparing for a natural birth, but in the end I couldn’t do it. And now, here I was with all these fluctuating hormones (and unbeknownst to me at the time, the beginnings of postpartum depression), and I didn’t know how to accept the fact that I couldn’t give birth naturally.

My birth story definitely led to some awkward conversations with other pro-natural childbirth women. When I told them about my son’s birth, I could see the look of disappointment in their eyes when I told them I had accepted pain medication. “I still didn’t get an epidural,” I’d say, trying to prove that I was at least somewhat strong. But even still, nothing I said helped me feel any better.

In fact, I had unresolved feelings about my first son’s birth until I finally gave birth to my second son naturally after 26 hours of labor. Having finally achieved that incredible goal of having a child naturally, I realized, that natural childbirth wasn’t really that big of a prize after all. In fact, I didn’t even tell people I had a natural birth. Compared to the immense love I felt for my new son, the fact that I didn’t have pain medication seemed like an unimportant detail.

A woman will always remember the story of how she gave birth. And for some of us, those stories may include disappointment in how our children made it into this world. But I wanted to write this post to tell you that it’s okay. It’s okay to be disappointed with the choices you made while you were in labor. It’s okay if you had wanted a natural birth, but ended up with an epidural or a c-section. In the end, your body still did an amazing thing! It grew a tiny new human and gave birth to it, and that’s something to be proud of, regardless of how your little one was born.