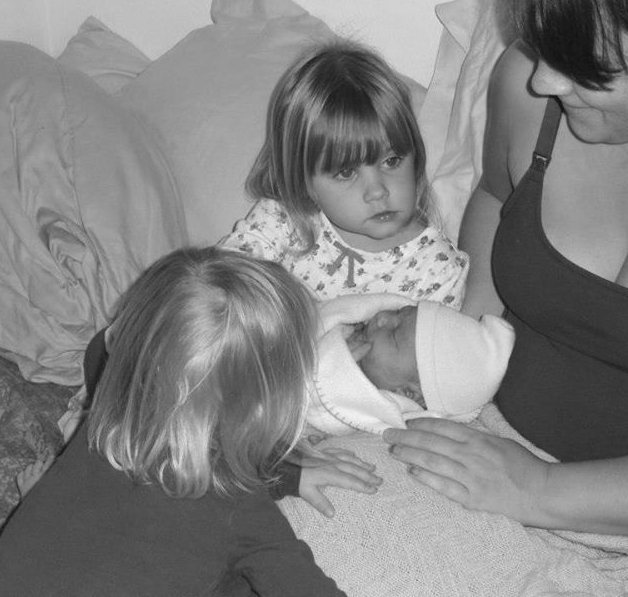 I never thought a home birth would be for me. Only crazy people did that, right? Then my best friend had a home birth. Soon after, I joined a natural birth community in Louisiana when I was pregnant with my first daughter and it opened my eyes a bit more. But, it still seemed too “fringe” for me. One unnecessary cesarean and a hospital VBAC later, I began planning a homebirth during my third pregnancy.

Initially, my husband Taylor was nervous about the idea, understandably so. Midway through the pregnancy, something clicked for him. After a visit with our midwife he said, “It just makes sense. Why wouldn’t we have a homebirth with Sherri? She has so much experience.” He even decided that he would like to catch the baby. He had definitely evolved from not being sure about cutting the cord at our first birth.

I went through the process of obtaining approval from the Louisiana State Medical Board which is required in Louisiana for a homebirth after cesarean. My OB was very supportive and agreed to serve as a backup should I need to transfer to the hospital. My midwife had attended my second daughter’s birth as my montrice and already had a working relationship with my OB. As labor support teams go, they were dynamic and supportive.

Because my midwife was the director of the midwifery program at South Louisiana Community College in Lafayette, prenatal visits were a bit different. My two older girls and I drove out to SLCC and did the visit in a small classroom with Sherri and about a dozen student midwives. I loved it, and the girls did, too. I had no problem letting 13 sets of hands feel the position of the baby and ask questions. In the 3rd trimester, we began having prenatal visits in our home. Sherri let the girls use a measuring tape and borrow her stethoscope. It became commonplace for my daughter Evie to take my blood pressure and for Lucy to try to measure me. 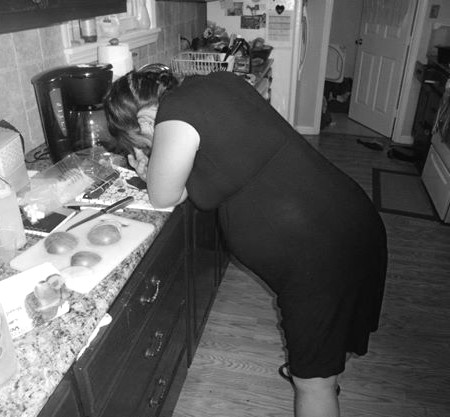 During the week leading up to Josie’s birth, I was a nesting machine. The evening of Friday, January 11, 2013, I began feeling pressure and what I thought might be contractions, but I didn’t want to get ahead of myself. I continued having a few signs of impending labor on Saturday and made sure to prepare everything for the birth. The linens were ready, outfits were picked out, and the birth basket was organized. “Now the baby can come,” I thought.

Sunday morning, I woke up early with a feeling something might happen that day. While lying on the couch, I felt a small “pop”. When I stood up, it was clear that my water had broken. I called my midwife to let her know and she suggested I go back to bed since my contractions hadn’t started. She would be by later in the day to check on me. I knew I couldn’t sleep, so I made breakfast and French braided my hair, something I’ve wanted done during my other births but never managed to make it happen.

By 9 am, I was having contractions 5 minutes apart. A friend came to pick up the girls, and I woke up Taylor to let him know what was going on. I had a feeling that things were moving quickly and soon my midwife was on her way. Between contractions, I was giving Taylor orders of last minute things that needed to be done. I was starting to feel a lot of pressure and was not managing contractions well. I wanted to sway and move, but for some reason it became difficult during contractions.

At 10:40, Taylor called Sherri again and told her that I felt like I needed to push. She arrived about 20 minutes later. Everyone was surprised by how quickly things were progressing. Her first thought was to fix the tub, and then I said, “She’s coming.” She responded, “Ok, where do you want to birth her?” I replied, “I don’t care. She’s coming.” We decided to try to move to my bed. Every step was painful. I finally made it to the bed after what seemed like an eternity.

The pushing continued. My pushing with my second daughter Lucy was calm and quiet. This experience was quite different. In desperation, I inquired, “Is she coming?” Sherri assured me that she was. I didn’t want to push for hours like I did with Lucy. Sherri could tell I was frustrated, and she explained that the baby was turning to get into the right position. I asked again, “Is she coming? Can you see her?” She laughed and said, “She’s here, she’s coming.” At 11:21 am, I pushed again and birthed my baby. Before I knew it, she was in my arms, and I was crying and laughing! My little girl was born, in my house! I was done! Only 5 hours and 21 minutes! 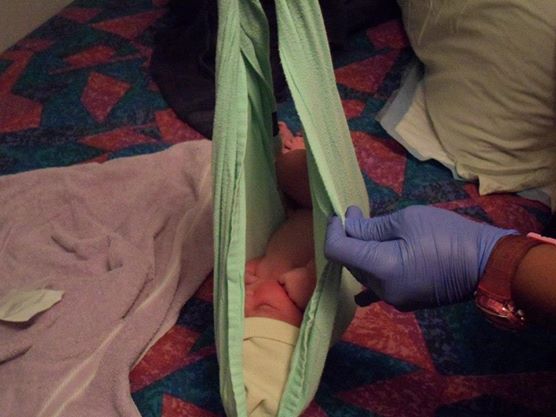 After the birth, it was great to sit relaxed in my own bed, in my own home. There was no hustle and bustle. No one scrubbing on the baby, no measuring tape, no whisking her off to get measurements and weight. Sherri and Charlotte, a student midwife, were charting, cleaning up from the birth, and even folding laundry from the day before. Periodically, one of them would come in and check my blood pressure, but it was very peaceful.

Throughout the remainder of the day, I would laugh and say, “I’m SO glad I’m not still in labor! She’s here, can you believe she’s here already!” Several hours postpartum, Sherri, Charlotte, Taylor and I began talking about the events of the morning. We had all had little inklings to do things slightly differently. We all knew something was going to happen, but only God knew that our little Josie would be born.

Hannah lives in Baton Rouge with her husband Taylor and their 6 daughters: Evelyn, Lucy, Josie and spontaneous identical triplets Bonnie, Betsy, and Abigail born April 14th. She is the Co-Leader of ICAN (International Cesarean Awareness Network) of Baton Rouge and Coordinator of the local Rally to Improve Birth.

Disclaimer: This post is sponsored by Woman’s Hospital.  Woman’s did not have any influence on the posts that were approved for this series.