WARNING: The comments section is rated Internet-MA and may cause heartbreak and/or loss of faith in humanity.

If you hang around on social media as much as I do, you’ve likely heard the phrase, “Don’t read the comments.” The comments section is most definitely the train wreck of the internet. Despite the very best of intentions, we always seem to get sucked in. And more often than not, we regret it. The judgement, hate, and vitriol coming from the keyboard warriors can be more than we can take. While it can be hard to resist, there are a few things to consider before you hit Reply. 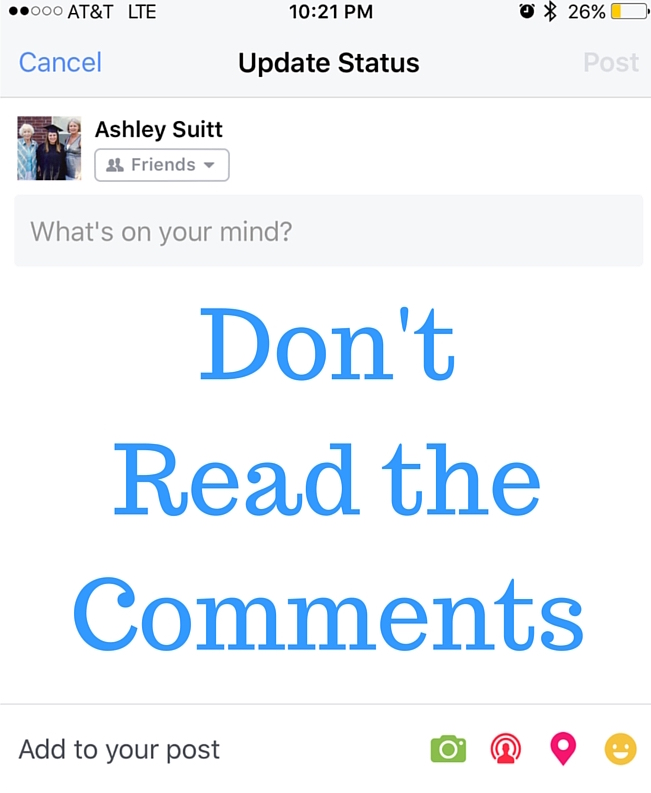 1. Behind the screen, we’re all human.

Think about what you are about to type. Would you say it to the person’s face? Does it represent who you are as a person? Or who you want to be? It’s easy to be snarky or rude to a stranger on the internet, but internet strangers have feelings. Even the mean ones.

2. You are accountable for what you type.

We often hear about the “Would you want your grandma to see that?” standard. But when it comes to the internet, consider the “Would you want your employer to see that?” standard instead. Remember that your name is next to that comment. And people can find out a lot of information with your name. I’ve heard of many situations where comment readers have looked up information about posters and have sent their hateful comments to their employers. And this shouldn’t come as a surprise. Right or wrong, employers are more and more curious about things their employees say on social media sites as they see it as a reflection of their companies.

There is nothing wrong with constructive criticism, but being argumentative or calling names isn’t cool. It only makes you look rude and immature. Ask yourself these questions before posting: Is this productive? Why do I feel compelled to make the comment? Is it going to bring people together or create more division? Is this something that calls for introspection or a knee jerk reaction?

4. Hesitate before you judge.

If a mom asks a question about formula, she wants an answer about formula. There is no need to ask her to rehash how long she nursed, what holds she tried, or how many lactation consultants she met. We’re all doing the best we can and making our own decisions about what is right for us as mothers. It’s ok to build each other up!

5. If all else fails, keep scrolling!

If you don’t have anything nice to say, don’t say anything at all. Who of us hasn’t written out a comment then deleted it? Sometimes, the best answer is to keep your thoughts to yourself.

Being a mom is hard enough. You don’t have time to be a cyber bully.  There are people whose lives and families are literally threatened on the internet. And it isn’t worth it. Always think before you post. And if you really have self control, just don’t read the comments!