Two days after Christmas, my husband and I moved from a four-bedroom house to a three bedroom apartment. After the flood, we had sold our house and moved to a rent house with plans to buy not long thereafter. Then my husband was laid off. And suddenly those temporary lodgings became a bit more long-term. So when Christmas rolled around, and we still weren’t ready to buy a house, I was pretty annoyed with the situation. Moving into a smaller apartment seemed like a step backwards instead of forwards, which stressed me out immensely. 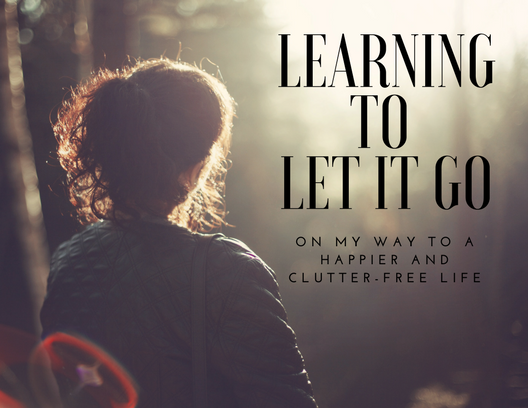 A few days after we moved, my daughter told me, “I don’t want to go to our new home, Mama. I want to go to our better home.” This was the eye-opening reality check that I needed. I knew that even though I had worked to remain positive, she was sensing my own feelings about the situation. I needed an attitude adjustment. After this, I really tried to see the positive side of moving into a much smaller space. And the biggest positive is that there’s something about moving that helps you to evaluate what you actually need.

It turns out that there is a lot of “stuff” that I just don’t need that I’ve accumulated over the years. I am by no means a hoarder; we regularly donate things to the thrift store, but apparently, I’ve collected a lot more things than I actually need. Since we have moved, I’ve adopted somewhat of a minimalist approach so that we can live in this smaller space and not be overwhelmed with junk everywhere.

My goal for the month of January is to take a load of “stuff” to the thrift store once a week. So far, I’ve exceeded my goal. Let me tell you: IT. FEELS. GREAT.

I’ve kept so many extras of things – extra pots and pans, plates, purses, and the SHOES. I’m letting it all go. What’s really amazing to me is that all of this extra junk wasn’t just cluttering up my space and home, but it was cluttering up my mind. I felt like I could not keep up with housework ever with a full-time job and two small kids. But what’s amazing: it’s not that difficult to keep a smaller space clean! IMAGINE! Less IS more!

This has been such a good thing for me that I want to encourage everyone to do the same. I promise you will feel so much better when your space and mind are clear of clutter.

The Life Changing Magic of Tidying Up

I haven’t read this book personally, but I have friends who swear by her methods of “tidying up.” It’s currently on my Amazon WishList for as soon as I finish reading the other two books I’m working on!

This book was recommended by another contributor to the blog, and so far, I am loving it. This book not only talks about decluttering but also about simplifying every aspect of your life.

This website is all about cleaning routines. I love her saying, “You can’t organize clutter; you can only get rid of it.” A word of caution: the emails are completely overwhelming, and, in my opinion, another form of clutter. If you want to establish some routines and daily “cleaning zones” this is a wonderful resource.

Good luck, mamas! Be like Elsa and Let it Go!