Ok, I lied. She isn’t five. She’s four and three quarters. But, she isn’t sleep trained. In fact, she’s never been one who understood the glorious allure of shut eye. Most days, I’d rather eat one of those world record hot peppers than deal with bedtime. And naps? Ha, not in this lifetime. This kid just plain hates sleep. I know I’m not alone. I’ve watched Super Nanny. I also know that I still have it pretty darn good in other departments, so I can’t complain too much. But I’m still praying that any potential future child of mine will love bedtime.

It all starts during the bedtime routine. Putting on jammies and brushing teeth is a threat-filled marathon with books as hostages. Then we have the procrastination. The child magically needs to pee, eat, drink water, get a new braid, has a booboo, and questions the meaning of life at the exact time that she is supposed to go to sleep. Sleeping alone is a non-starter with this kid. I’m frequently asked “You and daddy get to sleep in a bed together. Why do I have to sleep by myself?” Well played, kid. Well played. So basically I’ve just started lying in bed with her then sneaking out when she falls asleep. It makes me less stabby than having to put her to bed 27 times each night. And sometimes, it’s pretty sweet. She gets extra cuddly and just might even open up a little about her day. 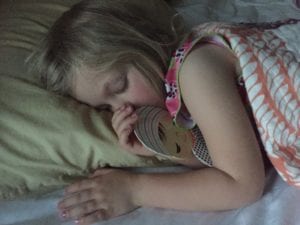 But that, my friends, is not the real reason she isn’t sleep trained. About 2.5 years ago she started waking up every night between 11 pm and 3 am and joins us in our bed. When this first started, I remember thinking “This cannot continue” but being too tired to actually do anything about it. Then it became a thing. And if I’m too lazy to make my bed in the morning, you can bet that I’m not going to try to change a habit in a kid with a frontal lobe that isn’t fully developed at 2am. Now I know you’re probably screaming at your screen right now self-righteously saying “I will NEVER do that.” You may be right. But, hear me out because I kind of love it.

When she comes in our room, I think she mostly sleep walks. That or she falls right back to sleep when she gets in our bed, and who doesn’t just LOVE a sleeping child?!? In fact, the vast majority of the time I don’t even wake up. And she’s so snuggly! Another perk is that she sleeps in later. On the nights that she ends up staying in her own bed, she always seems to be up and at ’em by 6am. But when she’s in our bed, she easily makes it until 7 or 7:30 which makes all the difference on a Saturday morning. It’s also hilarious to see what she brings with her into our room. Her bed is made up of 35% blankets and 43% stuffed animals. I can usually count on her to bring in at least one stuffed “snuggly toy.” But she’s also included a 3-foot stuffed lamb, a flash light, or even handfuls of stuffed animals on various nights. Did I mention she’s so snuggly!

I will admit that there are a couple of cons. Namely that it’s really hard to relax knowing that your preschooler could walk in any minute on nights when you, say, need a little extra privacy. And she prefers to sleep on the outside next to me which means I’m often positioned between two people who could get second jobs as space heaters. When this first started, we had a queen bed and it was not cutting it. If you find that you end up bedsharing and can’t decide if you should upgrade to a king bed, quit thinking about it and do it. It will change your life.

The way I see it, if I’m already asleep, what difference does it make if she comes in to cuddle? My (almost) five-year-old isn’t sleep trained. And I’m totally fine with that.