I was recently watching one of my Friday guilty pleasures, “What Would You Do?” when John Quinones presented a conundrum that was near to my heart: should parents decide what sports their children play?

Here was the scenario: a kid would plead with his parent, begging to play football. The parent wouldn’t allow it, citing safety reasons. The social scenario, then, was whether strangers would intervene, and, if so, whose side they would support. Although the show presents its scenes somewhat objectively, there is usually a response they’re hoping to solicit. The shocker for me, though, was that they seemed to be in support of the pleading child, no matter how scientific or well-founded the parent’s logic was. 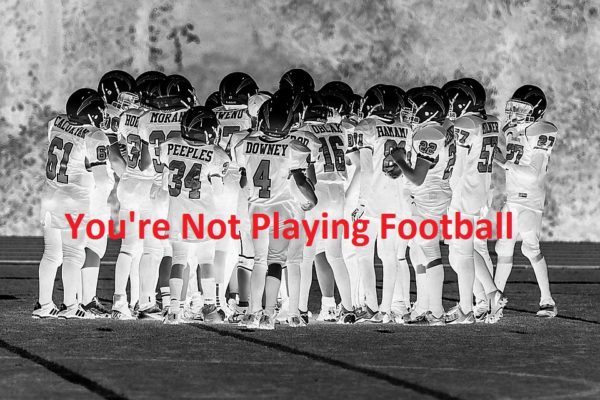 I was frustrated and found myself talking to the TV, so bear with me as I expound upon what Mr. Quinones couldn’t hear from my couch.

First, they’re tiny people. And I don’t mean because they’re still young – my oldest son is in the first percentile for height. The 1%. In fact, he was recently picked on by a girl in his second-grade class for being short. She wasn’t wrong: he’s the smallest kid (girls included) in his class. It’s not a fluke, though: both of his parents are short people, and their parents and siblings are short. It’s just not in the cards.

Second, football simply isn’t safe. Arguably, it could actually be safer if you are the thinner, speedier type than if you had the stocky, “football” build, given that those sturdy guys tend to be in positions that receive the most blows. However, both body types and all positions have tremendous probability of getting concussions.

Yes, I said it. Concussions.

No matter how advanced our protective gear may get (helmets with added padding, etc.), we will never be able to build in biological shock absorption (like the kind many animals have) between the brain and the skull, and this is where the trauma of concussions occur. We may soften the blow of helmet-to-helmet contact or even helmet-to-ground contact, but we simply can’t soften brain-to-skull contact because it happens on the inside. In spite of a long history between the NFL and concussions, we still aren’t closer to or safer from the short- and long-term harm of brain injury. I doubt we ever will be.

What bothers me the most about the argument, though, is the lack of transparency. This goes from the top down. For example, the NFL was accused of hiding risks of long-term concussion studies. Additionally, there are innumerable articles outlining the severity of these injuries long-term and the league’s previous irresponsibility. While I concede that the league has taken steps to improve safety for players, it cannot prevent the permanent damage that it has attempted to cover up.

Yes, I am a football fan.

And listen, I get it. I actually consider myself a football fan, and I understand that no sport can fully guarantee that its athletes won’t get a concussion. Distance runners could fall and hit their heads on the street. Soccer players could head-butt each other. Baseball players could get hit with a line drive. But none of these sports have the track record of football. None of them even come close to its dangerous, long-term effects. And we’re not talking about shoulders here. We’re talking about brains.

Of course, I want my children to gain from the many beneficial aspects of football, but this sport is not the only one that lends itself to teamwork, sportsmanship, resilience, persistence, and character-building. All of these were mentioned in the episode of “What Would You Do?” as many claimed that the parent was unfairly “sheltering” the pleading child. I happen to think there’s a big difference between sheltering kids from activities / concepts they aren’t mature enough to handle and physically protecting them from statistically probable physical injury. You know, like buckling them in a car seat instead of letting them bounce around the back seat.

So while I was tempted to call this article “Sorry, but You’re Not Playing Football,” the truth is that I’m not sorry. And you’re still not playing football.