I knew I was pregnant on my twenty-seventh birthday. I had wanted a baby for so long, though, that I didn’t want to spoil my birthday if I took a test and it was negative. So the day after my birthday, I took a test and sure enough two pink lines confirmed what I already knew. My friend was one of the first people that I told about the pregnancy. I was in her van, and we pulled over onto the side of the road so she could give me a hug and then we, well, squealed together with excite 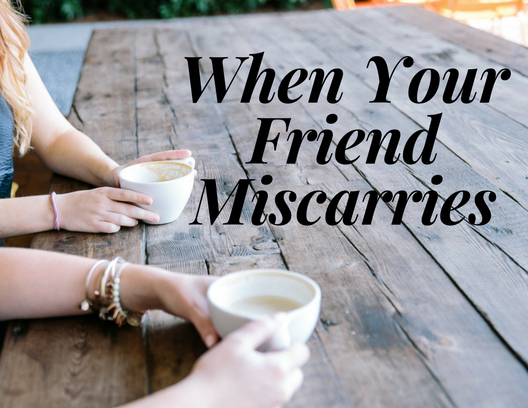 I was a little queasy for a few days, and then it stopped. I thought I had just gotten lucky and was escaping the rottenness that is morning sickness. But I could not have been more wrong.

About a week later I started spotting and left work to go to the doctor’s office for an ultrasound to see what was going on. When I got to the doctor, they told me to empty my bladder for the ultrasound. When I sat down, there was a huge gush of bright red blood. I knew then that it was over before it had ever begun. The ultrasound showed that the baby had stopped developing about two weeks earlier. The doctor did not immediately label it a miscarriage, but he did not give me any false hope either. He told me that we would need to wait and see.

I stayed home from work the next day. I had been texting my friend and telling her what was happening. She called me early that morning and asked how I was doing. I don’t even remember what kind of nonsense answer I must have given, but I do vividly remember what happened next. “I’m coming over,” she said.

She showed up at my house with food in hand, some cooked already as she [not so] gently reminded me to eat. She also got busy in my kitchen cooking dinner for me and my husband. Then she washed, dried, and folded my laundry, not taking no for an answer. As she folded my laundry, we talked. She listened as I told her I was devastated and just hoping that somehow it was going to be a miracle – that I wouldn’t lose this baby. She gossiped with me about who even remembers what now. Whatever I wanted to talk about, we did. Did I mention that she did all of this for me on her birthday? I couldn’t, and still can’t, get over that selfless act of kindness.

At no point did she tell me, “It’s going to be okay” or “At least you know you can get pregnant” or “There will be other babies” even though, as it turned out, all of those things would have been true. She just listened.

The most helpful thing that my friend did for me when I miscarried was listen. As time passed and I did not get pregnant again for another year and a half, God knows she listened. I’m sure she got tired of hearing me say “Why did this happen?” or “Why am I teaching five pregnant teenagers this year? It’s not fair!” and “Why haven’t I gotten pregnant again yet?” In spite of all these repeated questions, she just listened. She was there for me when I needed a listening ear.

When I think back on this time, sometimes I do wonder what my life would be like now if I hadn’t miscarried that first pregnancy. I would have a four year old running around with my other two babies, and I can’t help but wonder who he would be or what he would look like. But sometimes things just happen for no reason whatsoever. They just happen.

I do know, though, if I had not gone through that experience, I would not have seen how best to respond to those in need. Miscarriage can feel like such an isolating event, which is ironic considering how common miscarriage actually is. Maybe it’s because we don’t talk about it like we should. When I hear that someone who has experienced a loss, what I ask myself now is how can I be there for her like my friend was there for me? I want to show compassion and kindness and let her know that she, and the baby she lost, both matter.

When your friend miscarries, it doesn’t matter what she says otherwise, what your friend needs … is you.